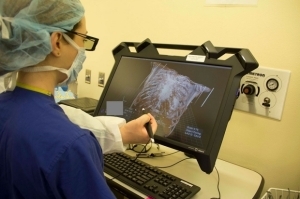 Courtesy: Lucile Packard Children's
Hospital Stanford
Virtual reality is a major trend in the video game industry and it’s now making its way to the front lines of health care.

Gina Milner was born with a heart defect called Tetralogy of Fallot and it was repaired when she was a child. When she had difficulty breathing last fall, tests showed that she had a leaky pulmonary valve and her heart and lungs couldn’t deliver enough oxygen to the rest of her body.

The majority of patients in this situation would undergo open-heart surgery to get a new heart valve, but her surgeon, Dr. Katsuhide Maeda, was able to perform a minimally invasive procedure with the help of a virtual reality imaging technology developed by EchoPixel called True 3D.

Using a computer program that transformed Milner’s CT scans into a 3-D image of her heart, lungs and chest cavity, Maeda was able to rotate and assess every layer of the anatomy from any angle.

True 3D helped him plan out what anatomic structures he would see behind a small surgical opening at each stage of the minimally-invasive surgery. The 3-D view allowed him to determine if the single incision would allow him enough space to work with.

Instead of making a standard 6-inch incision, Maeda was able to perform the procedure through a 2.5-inch incision. That allowed Milner to recover more quickly, lowered her risk of complications and caused less post-surgery pain.

Packard Children’s hospital will also use the virtual reality technology to train radiologists and surgeons in diagnosing and treating rare diseases. The trainees can use an electronic library of 3-D disease images to perform virtual dissections.