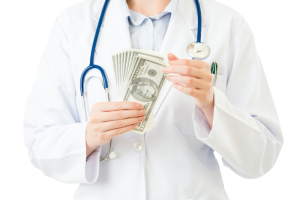 A new study addresses the concern that widespread acceptance of payments and gifts could tempt physicians to make decisionｓ that are not in the best interest of their patients.

By cross-referencing information from a publicly available open payments data set from 2014 with a short online survey of adults, the researchers found that 65 percent of patients had in fact visited a doctor who accepted medical industry payments — but only 5 percent know if their doctor had received payment.

Since 2013, under the auspices of the ACA, pharmaceutical and medical device manufacturers are required to report gifts and payments to health care providers.

"The findings are important because they tell us that the reach of industry payments at the patient level is much more extensive than we had previously thought, and they tell us that more should be done to inform patients," Genevieve Kanter, Ph.D., one of the authors and assistant professor in the Department of Health Management and Policy at Drexel University

According to Kanter, the study, which was published in the latest issue of the Journal of General Internal Medicine, was the first to take a population-based approach to estimating the reach of industry payments.

"The previous work in this area had focused on the fraction of doctors who had accepted payments," said Kanter. "But we thought these estimates might have given us a partial view of the reach of industry payments in relation to the typical patient."

The 3,542 adults who participated in the online survey were asked if they were aware of such payments, and to name the physicians they had seen most frequently in the previous year. The survey data was then cross-tabbed with the open payment data set to arrive at the results.

A previous study published in the Journal of the American College of Radiology focused on the non-research payments and gifts accepted specifically by radiologists, and determined that they accepted far fewer payments and gifts than other specialists.

"We hope our findings will encourage patients to do more research on their doctors and encourage doctors to be more reflective about their interactions with industry," said Kanter, adding that she also hopes the findings will motivate policymakers and payors to do more to create transparency around this issue.

Funding for the study was provided by the Greenwell Foundation.