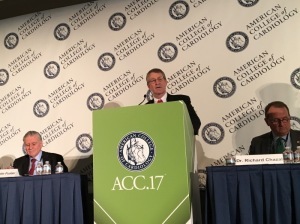 Dr. Michael Reardon
WASHINGTON, D.C. — Self-expanding transcatheter aortic valve replacement (TAVR) was as successful as open-heart surgery for patients at intermediate risk of surgical complications, according to data from a two-year trial presented Friday at the American College of Cardiology scientific meeting in Washington.

The procedure, which replaces a valve that has been damaged by aortic stenosis via catheter, was approved by the U.S. Food and Drug Administration in 2011 for patients at a high risk of death or complications associated with open-heart surgery. The transcatheter heart valves are manufactured by Medtronic and Edwards Lifesciences Corporation. Last year, the FDA cleared the use of the Edwards Lifesciences Sapien XT and Sapien 3 valves for intermediate-risk patients based on results from an earlier trial.

The recent trial, which used the self-expanding Medtronic CoreValve and newer Evolut-R valve, included 1,746 patients with an average age of around 80 at 87 locations in the U.S., Europe and Canada. The patients had an estimated mortality of 3 to 15 percent based on the Society of Thoracic Surgeons predicted risk operative of mortality (PROM) score, as well as a series of other measures.

Researchers did not see a significant difference after two years in the rates of death or stroke between the two procedures, with a rate of 14 percent for surgery and 12.6 percent for TAVR.

“It’s another trial for intermediate risk that has robustly met its powered endpoint,” said Dr. Michael Reardon, professor of cardiothoracic surgery at Houston Methodist Hospital and the study’s lead author, during a press conference discussing the results of the TAVR study and other scientific research at ACC.

Quality of life was also better for TAVR patients after 30 days, noting that patients were back playing golf “within a week.”

Reardon said the results should lead to changes in clinical guidelines.

“We had the best surgical mortality we’ve ever seen in a randomized trial, and despite that, TAVR stood toe to toe with that all the way out to two years,” Reardon said.

During the press conference, Dr. Valentin Fuster, director of Mount Sinai Heart and physician-in-chief of The Mount Sinai Hospital, noted the increased risk of brain lesions in TAVR patients, detected with MRI.

Reardon responded by saying that as doctors move into performing TAVR on lower-risk groups, they are employing embolic protection devices and looking at not just MRI results, but also at cognitive dysfunction.