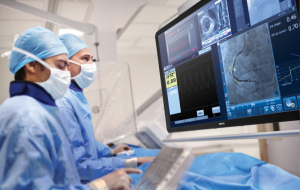 Instant wave-free ratio (iFR), a Philips technology used to assess the severity of coronary artery stenosis, was found to be comparable to fractional flow reserve in two large clinical trials.

The findings from the two trials, published in the New England Journal of Medicine, were presented over the weekend at the College of Cardiology scientific meeting in Washington.

The DEFINE FLAIR and iFR Swedeheart trials studied 4,529 patients — 2,492 in Europe, Asia, North America and Africa, and 2,037 in Sweden, Denmark and Iceland — who underwent either iFR-guided or FFR-guided coronary revascularization.

Both trials found that coronary revascularization guided by iFR, a pressure-derived index that Philips released in 2013, was not inferior to revascularization guided by FFR when comparing the risk of major adverse cardiac events at one year. The DEFINE FLAIR report noted that there were less adverse procedural signs and symptoms, and the procedure time was shorter when comparing iFR to FFR.

Andrew Tochterman, coronary segment leader for image guided therapy at Philips Volcano, said company officials were hopeful that the newly-released data would increase use of iFR.

“If you look across the globe or even in the United States, probably eight out of 10 stenting procedures don’t use this technology to help determine what to stent and how best to treat the patient,” Tochterman told HCB News. “We’ve spent a lot of time saying, ‘Why don’t people use it more?’ ”

Tochterman said iFR removes the need to administer a drug called adenosine to stress the patient’s heart during the procedure.

“We measure it at a specific part of the heartbeat where we get the most amount of blood and it gives us the answer we need,” Tochterman said.

Using a pharmacologic agent adds time and cost to the procedure, and also increases patient discomfort, as many report feeling like they are having chest pains during the procedure, Tochterman said.

“Until now, we’ve had to do that to get the answer on how to most effectively treat that patient,” Tochterman said. “Today, iFR showed that we can take that cost, that patient discomfort and that time away and still use the same pressure technology that we’re trying to get more doctors to use, and we can get the same patient outcomes.”