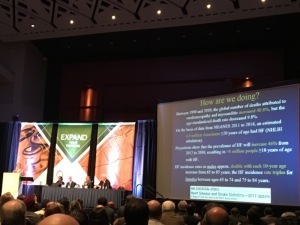 Mariell Jessup at ACC.17
Care of patients with heart failure has improved in the last several decades, but physicians do need to continue to seek ways to step up their care as heart failure affects more and more people around the world, University of Pennsylvania cardiologist Mariell Jessup told a crowd in Washington.

Jessup, who was named president of the American Heart Association (AHA) in 2013, delivered the 2017 Kanu and Docey Chatterjee Lecture at the American College of Cardiology’s scientific session this past weekend. The lecture is named for Kanu Chatterjee, a cardiologist at Cedars-Sinai Medical Center, the University of California San Francisco and the University of Iowa, who died in 2015.

During her address, Jessup focused on learning from the past and looking to the future. She recalled one of Chatterjee’s hundreds of papers, published in the New England Journal of Medicine in 1976, which found that response to therapy varied among patients who had heart failure, showing that “not everybody that’s sick is the same,” Jessup said.

Chatterjee would be pleased by the results of a study several years ago showing that the incidents of death among inpatients who had heart failure after a heart attack had markedly decreased over time, Jessup said. However, this is contrasted with more sobering AHA statistics: between 1990 and 2010, the global number of deaths attributed to cardiomyopathy and myocarditis increased by 40 percent, Jessup noted.

Data from the National Health and Nutrition Examination Survey (NHANES) found that the number of American adults living with heart failure is estimated to be 6.5 million.

Projections show that the prevalence of heart failure will increase 46 percent from 2012 to 2030, resulting in more than 8 million American adults with heart failure. And it’s not just an American problem, Jessup noted.

“It turns out that heart failure in that area of the world is very different than in our part of the world,” Jessup said. “They have very few ICDs, they’re a younger age, they have less ischemia, they have more hypertension, much more diabetes. Some of that is probably genetic, some of it is probably diet, some of it is culture, some of it is pollution. There are so many things, and yet, have we missed the opportunity to even begin to understand that, and understand the way disease affects us by not trying to capture this?”

So, what can physicians do differently? Jessup told the attendees to look more closely at the best candidates for implantable cardioverter defibrillators (ICDs). Doctors should also be looking at genomics and phenotyping, as well as the effects of geography and environment. It is also going to be increasingly important to look at gut microbes, and examine the impact of diet and exercise.

“If we’re going to ever understand and make progress on heart failure in the future, we have to go back to what Kanu Chatterjee told us,” Jessup said. “We’ve got to look at the subsets. We’ve got to understand the principles. And now we understand that those subsets and principles are a whole lot more complicated. So if we’re ever going to understand the impact of sex and ethnicity, let alone the things that happened when we were in the womb, and understand the social determinants of health … we have to have a new framework, a new way of doing trials, a new cooperation, not only in this country but in many other countries.”