The four top trends at ACC this year 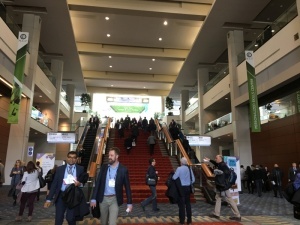 WASHINGTON, D.C. — Treating and curbing the growing problem of heart disease was the goal for thousands of cardiologists from around the world who came to the nation’s capital for the 66th American College of Cardiology Scientific Sessions this past weekend.

It was a showcase for breaking clinical trial results, including a possible expanded patient pool for transcatheter aortic valve replacement (TAVR) and less invasive tools for diagnosis. But these advancements come with questions and costs. They informed our four takeaways from the event.

1. TAVR — How low can you go?
The big news for TAVR was a clinical trial that showed that TAVR was as successful as surgical aortic valve replacement (SAVR) for patients at intermediate risk of surgical complications.

But concerns still remain about brain lesions in both procedures, and a study presented at ACC Sunday showed that Embol-X and CardioGard, FDA-approved devices designed to prevent such brain damage from debris, did not significantly reduce the lesions during SAVR, while another study released Sunday showed that TAVR was linked with microbleeds in the brain.

2. Reining in costs
One of the most anticipated clinical trial results was the study of evolocumab, a drug that researchers found decreased the risk of major cardiovascular events in patients with cardiovascular disease by 15 percent, along with significantly lowering their LDL cholesterol, when combined with statin therapy. The trial enrolled more than 27,000 patients in nearly 50 countries.

“Certainly America can’t afford to give this to every patient included in the trial,” said Dr. Roxana Mehran, a cardiologist at Mount Sinai in New York, during a press conference announcing the results.

3. Improving outcomes
The desire to lower costs, and the overall goal of improving patient outcomes, also extends to cardiac imaging.

“It’s no longer just doing a test, it’s really 'what is the impact and how do we improve the quality of care',” Dr. Robert Hendel, a cardiologist in Miami, told an audience during a talk on nuclear imaging. “We also have to recognize that we have limitations. We can’t do every test for every patient.”

Philips’ new Azurion angiography system, released just before ACC in February, is also being billed as a way to help hospitals shorten procedure time and lower costs with an improved user interface allowing for preprogrammed clinician settings and table-side controls, leading to less time in the control room.

4. Less invasive testing
Dovetailing with the move to control costs, device manufacturers are looking to make diagnoses less invasive, as evidenced by Siemens Healthineers’ partnership with HeartFlow, a technology that uses data from coronary CT angiograms to measure fractional flow reserve, instead of employing coronary catheterization.