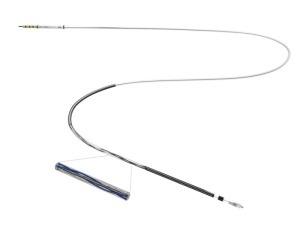 "Plexa ProMRI is the only defibrillator lead in the U.S. market that offers both a small lead body and access to MRI diagnostics. Plexa's small lead body minimizes the risk of vein occlusion or blockages," Marlou Janssen, president of BIOTRONIK Inc., told HCB News.

"In addition, Plexa's helical coil design is optimized to dissipate heat in the MRI environment, and allows defibrillator patients critical access to MRI scans," she added.

This announcement came after almost 10 years of research and development. According to BIOTRONIK, they enroll more patients in U.S. lead studies than any other global cardiac rhythm management device company.

Plexa ProMRI was approved by the FDA in February for use with implantable cardioverter defibrillators and heart failure devices.

The lead's wire was designed for maximum durability. It extends to the area between the distal and proximal shock coil with only slight electrical impedance.

Plexa ProMRI's suite of tactile design elements enable it to be used on various patient anatomies. The leads are available in DF4, DF-1 and DX configurations.

Plexa ProMRI technology is an evolution from the previous BIOTRONIK lead design families, which have demonstrated long-term safety and reliability in large-scale clinical studies. Starting in 2008, the Galaxy and Celestial clinical studies enrolled 3,840 patients at 146 centers across the U.S. to prove safety and efficacy.

A Plexa ProMRI study was successfully completed outside of the U.S. In the U.S., BIOTRONIK plans to conduct a large post-approval registry designed to follow 1,271 patients for five years after implant. The site nomination process is nearly complete, and their first enrollment is anticipated in the upcoming weeks.