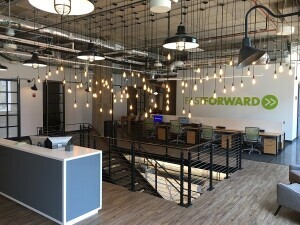 Tired of seeing most of the $1 billion-plus it raised for startup funding leave the state, Johns Hopkins University has opened a new state-of-the-art technology incubation hub, part of a $65 million expansion project.

The space — called FastForward 1812 — features 8,000 square feet of office and meeting space, with an additional 15,000 square feet of lab space, to accommodate a broad range of biological and chemical work. Since opening, the facility has welcomed in 19 innovative startups working in medical fields ranging from telemedicine platforms, treatment for Type 2 diabetes and cell therapies for cancer treatment.

“For too long, Baltimore hasn’t had robust infrastructure in place to support the number and types of life science startups spinning out of our academic and research institutions,” Christy Wyskiel, senior advisor to the president of Johns Hopkins University, told HCB News. “Our FastForward spaces and the resources they provide are making it easier to keep startups in the city.”

The FastForward 1812 opening is the product of an innovation committee formed to determine best practices for incubation hubs. The committee’s work was partly in response to the fact that 85 percent of $1.1 billion raised by Johns Hopkins since 2012 for such innovations has resulted in successful startups leaving the state to set up business.

The new location is the third FastForward location, and doubles Johns Hopkins innovation space footprint in the city. The program, which is part of a network of other incubation hubs in the city, also provides support to some off-site companies.

“We have a vision that the support we provide promising startups from around Baltimore and within Johns Hopkins will bring the benefits of discovery to the world, and play a role in revitalizing our city,” said Wyskiel.

According to Wyskiel, the FastForward program has already resulted in either launching or retaining several technology companies in Baltimore. These include:

Wyskiel also said that although many FastForward startups fall within the biotechnology vertical, the program is not exclusively focused on that sector. Its portfolio of startups is innovating in various industries, including commercial manufacturing, a variety of social ventures, and others.

Such initiative is in keeping with Johns Hopkins mission.

“Johns Hopkins founded our university more than 140 years ago with the mission to bring the benefits of discovery to the world,” said Johns Hopkins University President Ronald J. Daniels. “FastForward 1812 promises to build on our rich history of innovation, and provide the best minds at Johns Hopkins and across Baltimore with the support they need to build startups that bring life-changing technologies directly into people's lives."