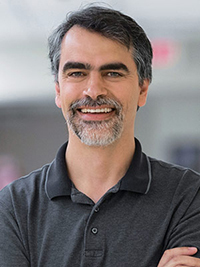 Ramsey D. Badawi
From the June 2017 issue of HealthCare Business News magazine
Ramsey D. Badawi, professor and molecular imaging chair in radiology at the University of California, Davis, and chief of nuclear medicine, and Simon R. Cherry, Ph.D., a distinguished professor of biomedical engineering and radiology at UC, Davis, are two men with a single vision: to build a PET scanner large enough to image an entire human in a single scan. The mission to create this “whole body” PET scanner became their passion – and now they’re on the verge of seeing that vision come true. HealthCare Business News interviewed the two men so they could detail how they are meeting this challenge.

HCB News: How did this whole body PET project initially get started?
Badawi & Cherry: In the fall of 2005, we were discussing future projects that we could collaborate on. I mentioned that I had done some simulations of long PET scanners in the past and that we should try to build one, perhaps 60 cm long or so. Simon replied that if we were to do this, we should go the whole hog and build a two-meter one that would cover the entire body! We both got very excited about this idea and decided to pursue it. We launched the project in 2006, when Simon described the idea at the Henry Wagner Jr. lecture at the SNMMI annual meeting. It took us 10 years from the time of the initial idea to finally obtaining funding from the NIH to build the first prototype.

HCB News: What are the perceived benefits from whole body PET compared to conventional PET imaging?
B & C: There are two main features that lead to a range of benefits: for total body applications, one can collect ~40x as much signal as with a conventional scanner (or about 5x more signal if one is only interested in a single organ) and one can scan the entire body simultaneously.

Due to the increased sensitivity to signal, one can either: