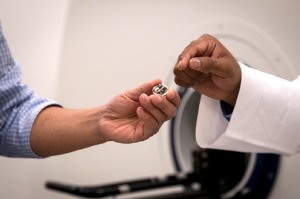 In a quest to realize scientific and clinical value by combining multiple technologies in an MR platform, a research team is working out what they said is a better way to read brain waves. The group is seeking to combine functional magnetic resonance imaging (fMRI) and electroencephalogram (EEG).

"fMRI is a great tool to pinpoint where on the brain a certain neural activity took place, while EEG provides unrivaled accuracy [regarding] when that activity took place," Zhongming Liu, Ph.D., who is overseeing the research, told HCB News. He is assistant professor of Electrical and Computer Engineering, and Biomedical Engineering at Perdue University.

According to Liu, despite the need for such a diagnostic tool to pinpoint the origin of epilepsy, for example, it is technically challenging.

"We would like to change this by creating a plug-and-play system accessible to researchers and clinicians with better performance and a lower price," he said.

The team decided to focus on making the device MR-linked as most hospitals already invested in that technology platform. Their device, Liu explained, has an advantage over current conventional devices because it lacks lengthy wires and is small.

"We are optimistic that with the MR-Link's small footprint and lack of metallic material in its construction, it will not only deliver high-quality signals but also significantly reduce the risk to the patient in high-field MR machines," he said.

Now that the team has designed a device that will record brain signals inside an MR, they are working to condense the function into a device that will fit on the tip of a finger. This, Liu said, will allow multiple devices to be placed around a patient’s head. No separate power or communication system would be required. Software will isolate and display the brain waves to the MR read image and readout.

"We bypass all these (power and communication) needs by utilizing the existing high-performance and expensive hardware in the MRI itself," said Liu.

The technology is patented through the Purdue Research Foundation Office of Technology Commercialization.