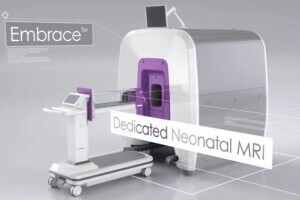 A new scanner, the Embrace Neonatal MR system, has been given a premarket 510(k) clearance by the FDA.

The system can be used directly in a neonatal intensive care unit.

“Although we can use traditional MR scanners to image neonates, taking babies outside of the neonatal intensive care unit to MRI suites presents great challenges,” Dr. Vasum Peiris, chief medical officer for pediatrics and special populations at FDA’s Center for Devices and Radiological Health, said in a statement, noting that “having a system in the neonatal intensive care enables safer imaging for this vulnerable patient population.”

The Embrace from Aspect Imaging is built specifically to fit a neonate's head. Its design will permit imaging of heads with a circumference up to 38 centimeters and weight between 1 and 4.5 kilograms.

In addition, the Embrace has a temperature-controlled incubator that goes directly into the system.

This minimizes the need to move the baby. Thanks to the design, “If urgent access to the baby is necessary during the imaging process, the baby can typically be removed from the system in less than 30 seconds,” according to the statement.

A vital plus for the system is that it can go directly in the NICU as it doesn't need a safety zone. “Since the system is fully enclosed, medical device implants in close proximity to the system are not required to be 'MR Conditional' or 'MR Safe,'” according to the FDA.

In January, there was news of another MR scanner built for neonates.

The scanner, located in the Jessop Wing Maternity Hospital in Sheffield, is still in the prototype stage. The 3-Tesla neonatal MR machine has been a joint effort between Sheffield Teaching Hospitals NHS Foundation Trust, the University of Sheffield, GE Healthcare, and the Wellcome Trust.

“Babies, particularly with brain problems, are unstable – they can stop breathing or their blood pressure can change in an unpredictable way,” noted Griffiths at the time. “If that happens it is useful to have neonatal staff who are used to that situation in such close proximity, which will improve safety,” he said, adding that “the MR images themselves provide a more detailed image, and can help provide a more accurate diagnosis.”