AI: A tool or a replacement for radiologists?

AI: A tool or a replacement for radiologists? 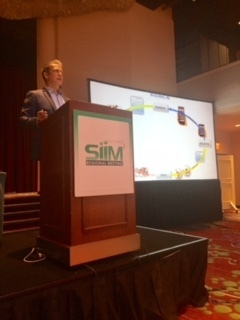 Artificial intelligence (AI) is set to take the place of human radiologists in the next five years, according to computer scientist Geoffrey Hinton.

The British-Canadian was recorded discussing the matter last year in a video that was screened during the presentation, Artificial Intelligence - Potential Role in Patient Care, before a room of radiologists and health care professionals on Wednesday, September 8 at the SIIM-NYMIIS Regional Meeting in New York City.

“I think if you work as a radiologist, you’re like the coyote that’s already over the edge of the cliff, that hasn’t yet looked down, so doesn’t realize there’s no ground underneath him,” he said in the video. “People should stop training radiologists now. It’s just completely obvious that within five years, deep learning is going to do a lot better than radiologists because it’s going be able to get a lot more experience.”

But while Hinton may believe that computers will take over, radiologists disagree, saying that the process for integrating AI with radiology is years from completion.

“I don’t think radiologists are going to be out of a job or anything close," said Dr. Eliot L. Siegel, a professor and the vice chair at the University of Maryland School of Medicine’s Department of Diagnostic Radiology who co-presented a program on augmented and virtual reality in medical imaging and moderated a round table discussion on AI. "I think there’s going to be more radiologists, and I think it’s going to take us about five years to actually start figuring out how do we deliver all this.”

Many believe that AI and radiologists will instead collaborate as humans are needed to interpret and determine or verify the right course of action for the patient based on the data retrieved from the machine. All agree that integration will require change.

“They’re going to have to become information managers,” said Brady Anderson, the senior director of new product development for enterprise imaging at Philips, in regard to AI placing more pressure on radiologists to learn new ways for analyzing and interpreting data.

Dr. Keith J. Dreyer, the vice chairman of radiology and director of the Center for Clinical Data Science at Massachusetts General Hospital, who led the presentation on AI, says that humans and machines work better together rather than separately, and that AI will instead change the perception of radiology.

"There are going to be a lot of algorithms to a lot of this stuff and there are going to be micro solutions that you need to put together," he said during his presentation. "When those come together, we don’t need to see thousands of numbers but they’re actually accurate numbers. They can go directly to the results of the EHR. But we should also have that access because we might have new data coming to us from this. So, I think people will probably look at this and will add value to the results we put back. This will probably be perceived as radiology, or could be.”

Other topics addressed included what radiologists desired most from the use of AI technology, such as the ability to synthesize and read images and studies at a faster rate and retrieve specific forms of data from patient records. There were also discussions on the origin and structure of AI, in what countries is it expected to develop the most, and the impact it would have on competition between health care organizations and big companies, such as Google and Amazon.