Is a cyber equivalent of 'D-Day' inevitable in the medical industry? 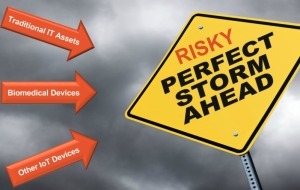 Hospitals still have too much exposure to cyberattacks, according to an industry expert speaking on a webinar hosted by the American Hospital Association (AHA) on Tuesday.

Bob Chaput, CEO at Clearwater Compliance in Nashville, Tennessee, addressed a range of threats in the hospital cyber protection sector that can be boiled down to a basic challenge.

Chief among his concerns is that a failure to do so is now a — potentially life and death — patient safety issue. Chaput cited the opportunity for a cyber-terrorist to hack into a medical file to change blood types, which would be deadly in a transfusion situation. Or using entry into a hospital HVAC system to shut down cooling to compromise imaging suites or blood storage chillers.

In his presentation, titled “Your Hospital Team’s Guide to Cyber Risk Management," Chaput cited this real possibility of patient assault to a statement by Dr. Christian Dameff, an emergency room physician and expert on cyber vulnerabilities.

“We’re going to have our digital D-Day, our Cyber D-Day, if you will, in medical, and there are going to be patients that die. It’s going to be a big deal,” said Dameff in Health & Fitness.

According to Chaput, there is still a major disconnect among hospital leadership about the cyber threat. He cited two recent surveys to back up his concern. In a recent AHA/SIIM survey, the majority of IT managers said:

- They do not regularly report on Cybersecurity to the C-Suite or the Board.
- There is a lack of resources, such as limited budget and staffing.
- Management is focused more on compliance rather than on security or real-time threat monitoring.
- Cybersecurity is viewed as an IT problem and not a whole hospital threat.
- Their hospital is not ready for a major, targeted cyber-attack.

"The health and public health sectors are heading into a risky, perfect digital storm when one considers not only traditional IT systems but additionally, biomedical devices that are part of the Internet of Things and all the building and facilities infrastructure systems and devices that support a hospital's digital ecosystem,” Chaput warned.

For a large hospital or hospital system, he said, there could be as many as 10,000 applications (ranging from billing to meal ordering) using protected patient information to conduct the business of the hospital. All of these are subject to cyber-attack.

Chaput spent much of the webinar outlining a process to implement a solid cybersecurity plan. He advocated using operational principles developed by the National Institute of Standards and Technology (NIST).

But his best advice?

“Health care information is more voluminous, more valuable, more visible and simultaneously more vulnerable than ever before,” said Chaput. He reminded the audience that cybersecurity is not a destination, but a constant journey. "It’s time for the board and C-suite to lead.”