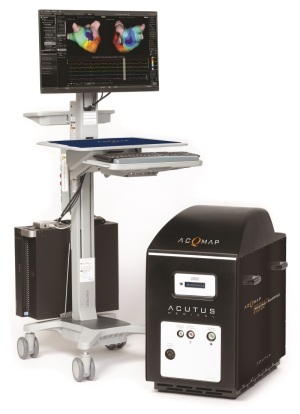 Acutus Medical's AcQMap High Resolution
Imaging and Mapping System
Physicians will soon have a new tool for assessing the state of complex and irregular arrhythmias during ablation procedures.

The FDA has cleared the use of Acutus Medical Inc.'s AcQMap High Resolution Imaging and Mapping System for visualizing changes in the hearts of patients during electrophysiology operations.

"Current technology is contact sensing, and the anatomy is traced by a catheter using voltage-based mapping," Steven McQuillan, senior vice president of regulatory and clinical affairs at Acutus Medical, told HCB News. "The maps are 'stitched' together from heart beats that span several minutes. The AcQMap High-Resolution Imaging and Mapping System uses ultrasound to create the chamber anatomy and non-contact, high-resolution dipole density based maps of global activation patterns for every heartbeat in patients with complex arrhythmias. Following each ablation treatment, the heart can be re-mapped in seconds to continually visualize any changes from the prior mapping."

The system consists of guiding sheath, a computer workstation, an electronic console and the AcQMap 3-D Imaging and Mapping Catheter, which was also approved for use by the FDA alongside the system.

Using its 3-D ultrasound technology, physicians can reconstruct the anatomy of the heart chamber and create high-resolution maps of the electrical-conduction of each heartbeat, allowing them to track irregular or complex arrhythmias across the entire atrial chamber. Maps can be constructed in either standard-voltage-based or higher-resolution dipole density style with the system re-mapping anatomy in seconds following each cardiac ablation treatment. This ensures continual monitoring of changes in the heart.

Approval for its use in the U.S. was based on clinical safety results from the DDRAMATIC-SVT trial with clinical and commercial testing taking place in Europe over the last two years.

McQuillan says the AcQMap System is bound to become a competitive product in the market by enabling physicians to develop individualized, tailored therapies to target and eliminate arrhythmias.

Acutus Medical celebrated its first U.S. regulatory milestone earlier this year with the FDA’s approval of the AcQGuide Steerable Sheath.

The system is CE marked. Sales in the U.S. are expected to begin in early 2018.