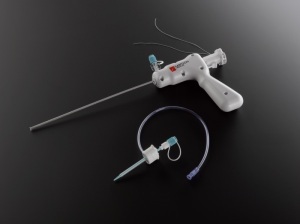 The Harpoon Mitral Valve Repair System (H-MVRS), an investigational device designed to treat degenerative mitral valve regurgitation (MR), can repair the heart while it continues to beat and has been declared safe and effective in a new study presented at the Transcatheter Cardiovascular Therapeutics (TCT 2017) symposium in Denver, with its findings published in the Journal of the American College of Cardiology.

"The Harpoon device was found to be remarkably safe and effective," Dr. James S. Gammie, a chief of cardiac surgery at the University of Maryland Medical Center and the principal investigator and inventor of the H-MVRS, said in a statement. "The device allowed the surgeons to precisely and effectively reduce the degree of mitral regurgitation without using an open-heart procedure. There were no deaths. Only one patient needed a blood transfusion, and there were no strokes, no need for pacemakers, no readmission to the ICU and no reintubations.”

The H-MVRS is inserted into the beating heart through a small opening within the ribs and uses echocardiographic imaging to find the surface of the defective mitral flaps. A surgeon then actuates the device and a specially designed needle creates a tiny hole and weaves artificial cords made of expanded polytetrafluoroethylene (ePTFE) through it to replace natural cords that have been broken or stretched, which cuts the connection between the flaps and muscles of the heart that enables closing of the mitral valve.

Once the needle is withdrawn, the cord is then tightened to form a double helical knot to hold it in place with the sequence repeated for the necessary number of knots, which is usually four to six. The other end of the cord is adjusted for optimum length and tied to the outside layer of the heart, the epicardium.

The study, sponsored by H-MVRS manufacturer Harpoon Medical, Inc., consisted of thirty patients with mitral valve regurgitation (MR) at six clinical centers in Europe, with the aim being to confirm if the device met European health and safety requirements. Twenty-seven patients met the primary target while three were switched to conventional open-heart mitral surgery. Two of these three cases involved poor imaging which prevented accurate placement of the tool.

A six-month follow-up showed 85 percent of patients treated with H-MVRS experienced mild or less MR, attributed to restoration of normal valve function and improvement in the ability of the heart to pump blood. Procedural operation time with the device was approximately half that of conventional mitral valve repair.

Gammie believes the system could potentially be applied for treatment beyond MR. “We think it may have a role in other types of heart valve problems,” he told HCB News.

The device was previously tested in Poland with U.S. testing set to begin in 2018. H-MVRS is not yet FDA approved.