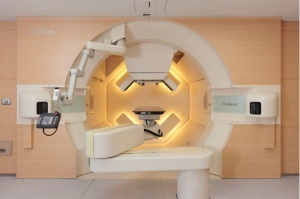 The solution, derived from collaboration with Hokkaido University, will enable radiologists to treat moving targets with proton therapy.

“This can be beneficial for moving tumors such as lung and liver, but can be used for other sites such as prostate,” Hiroyuki Itami, executive general manager of Hitachi's Healthcare Business Unit Particle Beam Therapy Division, told HCB News. “Other tumors that can be affected from the movement of the diaphragm can also benefit from this feature.”

Conventional motion management only tracks the surface of a patient’s body and requires a predetermined time as a basis for irradiating tumors.

RGPT tracks the location of gold markers placed near the tumor with X-rays, irradiating it while in motion and with greater accuracy.

The marker is positioned 2 mm in diameter, close to the tumor while a CT deciphers its location as a reference. A dual-axis orthogonal X-ray system and pattern recognition software are then used together to determine the marker’s spatial location due to respiration.

When the gold marker moves within millimeters of the planned irradiation location, irradiation takes place. The process, when repeated, can be synchronized to the respiratory motion of patients, thereby reducing the impact of irradiation on healthy tissue.

The addition of spot scanning technology furthers this reduction by repeatedly turning a narrow proton beam on and off at high speed as it changes location to irradiate whole tumor volumes, enabling protons to be administered with high precision according to the targeted tumor, even for those with complex shapes.

Hitachi’s choice of Hokkaido University as a partner in this endeavor stems from the school’s development of motion tracking technology in X-ray therapy.

“Their focus on research and innovation was a great match with Hitachi's technology and road map,” said Itami.

Construction of the technology was sponsored by the Japanese government through a grant awarded in 2010 to Hitachi and Hokkaido University under the Funding Program for World-Leading Innovative R&D on Science and Technology (the "FIRST Program").

Following its clearance, Hitachi plans to install RGPT at U.S. facilities under construction.

The system is also cleared in Japan under the Pharmaceuticals Medical Device Administration, and was awarded the Imperial Invention Prize of 2017 by the Japan Institute of Invention and Innovation for the most outstanding inventions.

Hitachi is currently in the process of obtaining CE approval for use of RGPT in EU countries.