NorthStar to be first U.S. source of Mo-99 in more than 25 years 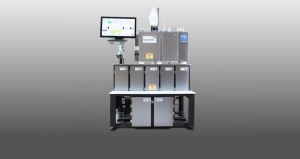 NorthStar's RadioGenix System
The production of molybdenum-99 (Mo-99), the parent isotope of technetium-99 (Tc-99m), is returning as a domestic source to the U.S. after a more than 25-year absence, says NorthStar Medical Radioisotopes, following FDA approval of its LLC’s RadioGenix System.

The solution, a radioisotope separation platform, is the first to utilize a non-uranium-based form of mo-99 to produce Tc-99m, establishing a more environmentally friendly process that ensures access to a stable supply of a diagnostic agent commonly used in imaging procedures to detect potential diseases, such as coronary artery disease and cancer.

"We do not use uranium as our starting material, but stable molybdenum-99. All of our production is done in the U.S., unlike other suppliers who have to transport materials from as far afield as Europe, South Africa and Australia," Steve Merrick, president and COO of NorthStar, told HCB News. "Finally, the use of stable Mo-99 means our waste streams are much less toxic and easier to manage. The final product from all production methodologies is still USP Tc-99m for injection."

Lack of Mo-99 as a domestic source for Tc-99m production has forced the U.S. to rely solely on supplies of it generated outside of its borders, creating a complex process that involved the shipping of enriched uranium from the country, and placing it at risk for possible shortages and supply chain issues.

Congress responded to this concern with the enactment of the American Medical Isotopes Production Act of 2012, which laid out provisions for encouraging development of U.S. domestic supplies of Mo-99 while eliminating the use of highly enriched uranium for medical isotope production.

The FDA, Nuclear Regulatory Commission (NRC) and other federal agencies have consequently worked together over the last few years to make these provisions a reality.

The solution utilizes a patented on-board, on-demand, point-of-use sterilization system for automated, on-site separation and preparation of U.S. Pharmacopeia (USP) Sodium Pertechnetate Tc-99m Injection that is USP compliant in the same form that is offered by all other suppliers.

Using state-of-the-art chemical processing and a stable supply of Mo-99 for production, the RadioGenix system will enable providers and physicians to avoid delays in treatment and diagnostics due to interruptions such as shutdowns or closures of foreign manufacturers.

It also will reduce the costs of shipping uranium and that of shipping materials back in the form of Mo-99, with the potential for its separation capabilities to be applied at point-of-care to other radioisotopes in the future, such as actinium-225 and bismuth-213, upon FDA approval.
1(current)
2