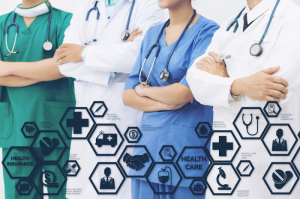 When an armed intruder or someone already in the hospital threatens care team members or patients, how can hospital staff respond to minimize violence, protect themselves and others, and get help fast from security personnel or police?

In some institutions, the use of mobile communication technology has helped reduce the amount of time required for security to respond to violence or aggression. For example, employees in some hospitals wear hands-free communication badges to connect quickly and directly to internal security officers when an incident of violence begins or appears likely. These wearable device badges also feature a panic button and can act as a locating device for security personnel when a staff member cannot speak or say where they are located.

At the emergency department of Upstate Medical Center in Syracuse, New York, any ED staff member can use such a badge to summon university police and public safety officers in the event of a violent encounter or other emergency. In many cases, this can be faster than making a phone call. A peer-reviewed study found that this approach reduced average security response times from 3.2 minutes in the six months before the badges were adopted to 1.02 minutes in the six months after use began.

Michael Garron Hospital in the Toronto East Health Network used a similar system to reduce the time it takes security officers to get to the scene of an incident from an average of 2 ½ minutes to 59 seconds. Besides enabling a badge user to contact security personnel quickly, the device can also alert people outside the hospital and act as a real-time locator if a staff member can’t say where he or she is located.

The “panic button” system can also be harnessed to help police pinpoint the exact location in a hospital where a violent incident is occurring. As an example, an armed intruder threatened nurses at a large hospital, but nurses were able to use their clinical communication system, which has a panic feature, to broadcast a special beep that alerted other clinicians and hospital security about the rapidly evolving incident. As a result, an ED security officer was able to guide arriving police directly to the location of the armed man.

Of course, communication is only part of a larger strategy to prevent assaults on health care workers. The Occupational Safety and Health Administration (OSHA) proposed a five-part strategy that health care facilities can adopt to reduce the danger of violence. They include:
1(current)
2