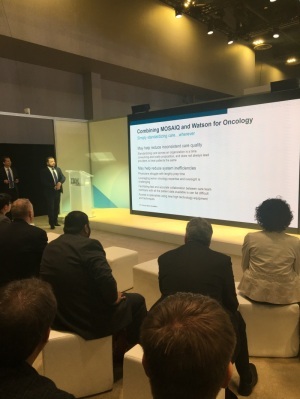 IBM and Elekta are planning to use
their recently established partnership to
bridge cancer care gaps between the
developing world and high-end markets
IBM and Elekta are setting out to bridge inconsistent care gaps in cancer care globally, through a recently formed partnership combining Elekta’s MOSAIQ Oncology Information System and IBM’s Watson for Oncology platform.

The two, who discussed their endeavor at HIMSS 2018 in Las Vegas, are prepping to grow and install their technologies at various sites worldwide in an effort to place radiotherapy and oncology treatment in developing nations on the same level as those in high-end markets, such as the U.S. and countries in Western Europe.

“If we look at all cancers in terms of effective treatment and five-year survival, in a high market like the U.S. or Western Europe, we’re expecting about a fifty percent survival rate,” Andrew Wilson, vice president of Elekta’s global marketing digital portfolio, said during his presentation, Standardization of oncology care means closing the oncology treatment gap for all. “But if you look at different countries with lower GDP, these are when co-statistics start to drop and in some articulate disease areas, it’s very evident of the inequality that exists across different markets.”

More than one billion people, age 60 and over, are expected to need some form of cancer care by 2030, compared to 103 million in the U.S. and 63 million in Western Europe.

While high-end markets possess five or more radiation machines, developing countries possess between one and three, less than one, or none at all.

The main issue, according to Wilson and co-presenter Steve Schudlo, executive director of strategic alliances for IBM, stems from the inability of these countries to train medical staff in how to use tools and interpret data in cancer care to determine the right course of action for patients.

Elekta will provide training for its MOSAIQ solution in the collaboration as part of its customer service. IBM will also offer clinical onboard of Watson for Oncology in accordance with its customer onboarding and support services.

The collaboration, initially launched in January, is expected to reduce the time and costs of standardizing care across hospitals, as well as system inefficiencies, by utilizing MOSAIQ’s treatment planning capabilities with Watson for Oncology’s AI-powered decision-support tools, providing functionality to sites.

“Our goal, ultimately, is to help the developing countries reach the same standard of care that we have in the developed countries,” Schudlo said. “We see this as a tool to help level the playing field. They don’t have the same expertise as a big academic hospital. What we’re hoping to do is level the playing field, provide those countries or different regions that don’t have that level of expertise the same level of expertise [as] at an academic hospital.”

The two expect the combined solution to be available before the end of the third quarter of 2019 financial year, pending completion of IBM's new FHIR specification during that year, and following a development period overseeing the combination of Watson for Oncology and MOSAIQ.