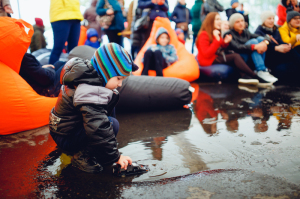 The aftermath of Hurricane Harvey
Direct-to-consumer (DTC) telemedicine is a viable way to deliver medical care immediately following a natural disaster, but most patients use it for routine matters instead of disaster-related ailments, according to a new RAND Corporation study.

“We hope that this work will draw attention to this new offering and help policymakers and providers consider how best to leverage it to reduce burden on the local healthcare system and quickly and effectively meet victims’ needs,” Lori Uscher-Pines, lead author of the study and senior policy researcher at RAND, told HCB News.

During the hurricane season last year, at least five DTC telemedicine companies offered free visits to hurricane victims. Uscher-Pines and her team studies the experiences of one of those companies, called Doctor on Demand, in the 30 days that followed hurricanes Harvey and Irma.

A total of 2,057 people affected by the hurricanes took advantage of Doctor on Demand services — of those, 63 percent were first-time users. To help with the demand, physicians located outside the affected states took on a little more than half of the visits.

According to the research team, the main advantage of telemedicine in disaster scenarios is that out-of-state physicians can be used to expand the response workforce quickly and in a cost-effective manner. That’s as long as the cellular and Wi-Fi infrastructure in the area isn’t affected.

The top diagnosis in the first month was acute respiratory illnesses and skin problems, which are typically ailments telemedicine companies treat nationally. But the first week post-hurricane, visits for chronic conditions, advice, counseling and refills, and back and joint concerns including injuries were more common among those affected by the hurricanes.

“Many DTC telemedicine companies report that they can treat minor injuries such as bruises and sprains, but in general, the type of DTC telemedicine that we studied should not be used for medical emergencies that require care at an emergency department, [such as] a serious fracture,” cautioned Uscher-Pines.

She added that even though a DTC telemedicine provider may not be in the position to diagnose and treat a patient’s injury following a disaster, they can help to triage complaints and direct patients to appropriate in-person care. In six percent of the cases, it was recommended that the patient seek in-person care.