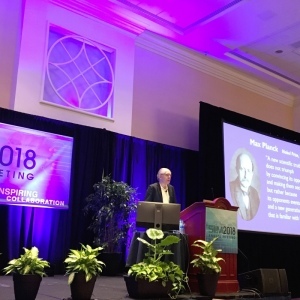 Dave deBronkart
A decade ago, Dave deBronkart was diagnosed with metastatic kidney cancer after an X-ray of his stiff shoulder showed a tumor in his lung.

deBronkart – or ePatient Dave as he is known on the speaking circuit, which includes a widely-watched TEDx Talk – dove headfirst into an online community for cancer patients and learned about high-dose interleukin-2, a treatment with an inconsistent track record that he suggested to his oncologist, and that ultimately saved his life.

After founding the Society of Participatory Medicine in 2009, deBronkart now lectures healthcare professionals about the importance of involving patients in their care and sharing the images and information that so often gets siloed.

“Don’t get caught as an expert in the way things used to be,” the 68-year-old former technology marketing executive told the standing room-only crowd gathered to kick off the Society For Imaging Informatics in Medicine annual meeting in Maryland’s National Harbor. “It’s perverse to keep people in the dark and conclude they have no potential.”

In his often-humorous address, deBronkart stressed that being in the midst of the information age means that patients are armed with more data than ever before, and so physicians and other caregivers should take patients who have researched their conditions seriously and work with them.

“You all deal with information, and when there is a change in how much is available to people, what they’re capable of changes,” deBronkart said. “It is in your control as the keepers of the craft of informatics to do what you can to amplify the impact, the meaning that’s held in that data.”

While deBronkart acknowledged that not everyone is like him, if someone wants to learn more to help save their life, or the life of a loved one, doctors should let patients help.

“Make sure everyone knows about HIPAA’s access rights,” deBronkart said. “Spread the word to other professionals that good things can happen when patients see images. Give them images quickly.”

deBronkart also referenced the OpenNotes movement to have doctors, nurses and other healthcare providers share the notes they write to describe a visit.

Along with artificial intelligence and machine learning, patient-centered care was a major topic at the meeting, with sessions on patient engagement in imaging and applying patient-centered design to healthcare IT, during which participants worked together to solve the problem of wait times for MRI exams.

Following the opening session, radiologists spoke about their efforts to foster patient engagement.

Dr. Alexander Towbin, associate chief of radiology informatics at Cincinnati Children’s Hospital, described how the department has worked with families who have children with autism to help guide the children through noisy MRI exams.

Dr. Geraldine McGinty, an assistant professor of radiology at Weill Cornell Medical College, who specializes in the detection and diagnosis of breast cancer, spoke about how she makes an effort to engage with her patients, despite the bulk of work remaining fee for service.

“Patients want to talk,” McGinty said. “I know that for me, the most meaningful thing that I do is sit face to face with a patient and answer her questions and help her go away feeling like she had a good experience.”