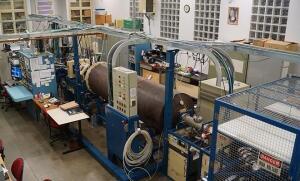 Researchers in Brazil have constructed
a model to improve particle flow efficiency
from accelerators
Greater efficiency in the delivery of particle therapies may soon be available for diagnostic imaging and cancer treatment with the development of a new model for stabilizing particle behavior.

Researchers at São Paulo's Physics Institute (IF-USP) in Brazil have developed a new archetype for controlling the chaos of particles within accelerators, enabling smoother administration for maintaining top image quality and reducing the risk of damage to equipment.

"When the particles become chaotic, the beam loses coherence. It means that particles have different energies and velocities, such that the particle beam is not suitable for medical imaging," researcher Meirielen C. de Sousa, a post-doctoral student at IF-USP, told HCB News. "Besides reducing the quality of images, chaotic particles may also damage the equipment. For good quality medical images, the particle beam should be coherent. Its particles should behave regularly, and present approximately the same energy and velocity at the delivery moment."

Chaos within a system is created by the interaction between an electromagnetic wave and the particles. The interaction between an electrostatic wave with well-defined parameters and particles in an accelerator provides greater control over the chaos within the system and creates multiple barriers in the process. These barriers, however, do not seal the area as precisely.

Testing their approach in a tokamak, an experimental plasma-based toroidal reactor used in nuclear fusion, researchers generated particles and accelerated them with back-to-back injections of energy from electromagnetic waves.

They then created a single barrier using resonance magnetic perturbation (RMP). The reaction of superheated plasma to the RPM trapped the ionized gas in a single region, preventing it from interacting with the walls of the system while increasing maximum particle velocity and reducing the requisite initial velocity.

Using numerical simulations, researchers determined that the simulated final velocity for a low-amplitude wave rose by seven percent, while the initial velocity fell by 73 percent.

Final velocity for a higher amplitude grew by three percent while initial velocity decreased by approximately 98 percent, with the barrier regularizing the chaos in a system, showing that such blocks reduce the initial velocity of particles upon injection into an accelerator.

In addition to medical imaging and cancer treatment, the model could be applied in high-energy physics; various industries, such as food sterilization, cargo scanning, electronic engineering; and in investigative work such as oil prospecting, archaeological surveying and analysis of artworks.

Though still under development, plasma accelerators can be designed in much smaller sizes than conventional accelerators, a fact which could make accelerators easier to operate with less space required and at reduced costs, according to Sousa.

Sousa plans and her supervisor, Iberê Luiz Caldas, plan to submit their approach to experimental physicists for testing.

The findings were published in the Physics of Plasmas.