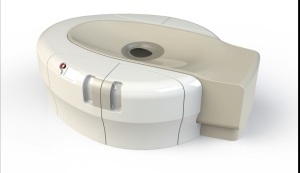 Koning KBCT V1.5
Koning Corporation’s Koning Breast CT (KBCT) system was FDA approved in 2015; a redesign reducing the footprint and room size, with input power similar to that of a conventional mammography system, got an FDA nod last November.

The Koning KBCT system removes painful breast compression and is a multi-application device FDA-cleared for both the diagnostic workup as well as a 3D guided biopsy, said David Georges, president of the company’s USA division. It fits into a 10-foot-by-14-foot room, which is similar to rooms designed for stereotactic biopsy.

“Prior to the redesign, the KBCT required the same installation space and input power as a full-body CT,” Georges said. “Doctors could actually proceed right to the 3D guided biopsy after the diagnostic workup if that’s what they choose to do.”

The company claims that with breast compression eliminated, the exam is much more comfortable for the patient.

“We’ve not had a woman out of the thousands of patients we’ve imaged say they’d prefer a mammogram,” Georges said.

With floor space a premium in most facilities, the ability to perform the diagnostic workup and a biopsy in the same room delivers new efficiencies in breast imaging, Georges said.

The technology is based on isotropic imaging of the breast and uses a mammographic X-ray tube and detector to gather true 3D volumetric images in under 10 seconds.

“It means we can visualize areas of interest from any angle equally,” Georges said. “Conventional linear tomography of the breast is a limited sweep angle acquisition and not the way we look at the head, chest and abdomen with whole body CT imaging. Breast tomosynthesis is pseudo 3D, whereas Koning is introducing true volumetric 3D of the breast.

“What physicians are telling us [is that] they finally have images that are free from distortion from compression,” Georges said. “Tissue is free from overlapping structures, a known cause of missed cancers in mammography. Until you separate structures, you will never have a clear view of what is cancer and what is not cancer.”

Georges said the dose is in the same range as dose from a diagnostic mammogram and equal to or less than digital breast tomosynthesis for a diagnostic workup. As with all imaging, dose is dependent on the size and thickness of the breast.

“The next challenge for us is to design a smaller device that will deliver low-dose screening exams integrating our true isotropic 3D acquisition process to obtain clear unobstructed images of early stage breast cancers before they spread,” Georges said. “We’re very close to achieving this goal.”

The company has 12 installations, two of which are the new design — one in Knoxville, Tennessee and one in Bangkok, Thailand. 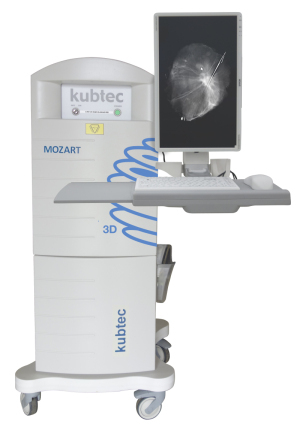 Kubtec MOZART
Kubtec’s MOZART System, an intraoperative tomosynthesis scanner designed to be used during lumpectomies, received an upgrade recently with the implementation of voice control and augmented intelligence.

“They can give commands to the instrument itself,” said John Leach, vice president of marketing for Kubtec. "They can run any 3-D scans, zooms or highlight areas of interest."

Surgeons have said they appreciate the fact that they don’t have to break scrub or direct OR staff to use the machine.

“It doesn’t talk back,” Leach joked.

The new augmented intelligence automatically identifies the lesion in the image and can show the surgeon whether they’ve removed the entire tumor.

The features are available as a separate package for the MOZART called the AI package, released in May at the American Society of Breast Surgeons annual meeting in Orlando. It is also packaged with new systems.

"We believe the space used in the OR is too valuable to be used to produce just an image,” Leach said. “Our focus is on enhancing the physician's ability to get the information they need from the image in order to make rapid, informed intraoperative decisions that benefit patient outcomes.”
1
2
3
4
5
6(current)
7