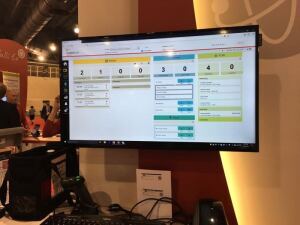 HCB News had the opportunity to sit down with the company at the SNMMI annual meeting on Sunday to discuss this new technology.

“In a client-server world, we need their IT teams to install, support and back up the applications,” said Bryon Scott, senior product manager at Cardinal Health. “There are expenses associated with that as well as time, so if we moved to the cloud, we could take that way from them and put it on us.”

Without a solution like this, nuclear medicine personnel are limited to their hot lab or the department office that the system resides in. But with Nuctrac, they can access that data anytime and anywhere via the cloud.

In addition, nuclear medicine departments have historically placed their orders by fax or telephone, which is time-consuming and could result in inaccuracies.

“You can imagine when you are handwriting things down and faxing it in, how difficult that can be to read at times. It turned into a lot of phone calls for verification,” said Scott. “Nuctrac eliminates all of that because it’s typed in and you verify it before you send it.”

New York now requires all prescription orders to be placed electronically and Cardinal Health thinks other states will follow suit in the near future. In order to do that, a facility has to either leverage conventional web ordering or Nuctrac.

Nuctrac integrates with a facility’s EMR to pull down patient data and orders and electronically transmit them to Cardinal Health’s pharmacy system.

Cardinal Health’s Safetrac bar-coding technology, which was launched about two years ago, is also available through Nuctrac. It pulls data from the EMR into the bar code on the patient’s wristband so the technology can verify that the patient is receiving the correct radiopharmaceutical.

“Every other drug inside the hospital, even something as small as an alcohol prep pad, needs to be bar-coded to that patient prior to administration,” said Scott. “But in nuclear medicine, because of custom patient-specific, time-critical radiopharmaceuticals, there was not an NDC associated with that. So when they went to try to bar-code it, there was no way to verify the drug to the patient.”

Safetrac creates a number that represents the drug, which can be loaded into the EMR to get drug verification at the bedside.

To date, about 50 sites have installed Nuctrac and another 100-plus orders are in the queue.