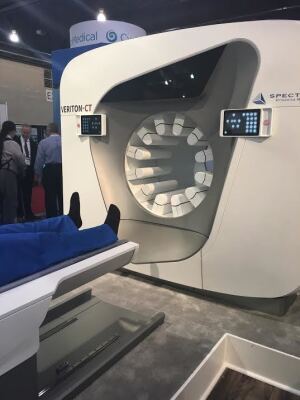 The VERITON SPECT on display at SNMMI
At the SNMMI annual meeting last weekend, Spectrum Dynamics commercially launched a technology the industry has never seen before — a 12-detector SPECT system.

"Nuclear Medicine has remained essentially unchanged for many years with no innovation,” Christian O’Connor, VP and GM at Spectrum Dynamics, told HCB News. “As a result, the number of SPECT procedures has been stagnant or even diminishing, generally losing procedure studies to PET and PET/MR.”

With the company’s new VERITON system, they hope to not only halt that erosion in procedural volumes, but actually bring some of those procedures back that have been lost to PET over the years.

The system underwent beta testing at the University Hospital Center in Caen, France and was first unveiled at the EANM conference in October in Vienna. It then received FDA 510(k) clearance at the end of April and CE approval in late May.

At the meeting, the company is also showcasing its VERITON-CT hybrid SPECT-CT system. However, CT integration with the VERITON system is pending regulatory approval and is not yet commercially available.

O’Connor explained that the VERITON solves many of the challenges that exist today in nuclear medicine, which largely revolve around the design of the technology.

“If you look at the conventional dual-head sodium iodide gamma camera there is an inherent design-based challenge,” he said. “Using two large, flat detectors to acquire a signal from a contoured anatomy isn't the best possible design.”

The VERITON’s 12 detector heads are all independently operated in order to achieve a very efficient contour of the body. It leverages an advanced proximity sensing system so the detector heads can get within millimeters of the skin.

That enables it to achieve three times the volumetric sensitivity of conventional dual-head scanners.

Although this is a much less expensive option than digital PET systems on the market, it still does have a $1 million price tag. Conventional SPECT-only scanners are available for as little as a third of that price.

Because of that, the early adopters will most likely be academic institutions, government institutions and large health networks.

"While we are not likely to be the least expensive system in the market we are confident we offer the greatest value,” said O’Connor. “Our customers see not just cost, but the clinical, operational and financial value that this technology brings to market.”

He added that the additional resolution and volumetric sensitivity that this scanner provides can reduce exam times by a factor of two or more. Depending on a facility’s procedure mix, that could allow them to eliminate a scanner, which is an immediate cost-saving opportunity.

Users can also leverage that additional sensitivity to reduce radioisotope injection volumes, which would offer both financial savings and reduction in radiation dose to patients.

“Market research has shown that it's not necessarily the price of a product but the value the product delivers,” said O’Connor. “If there is additional diagnostic clarity, confidence, or improved interpretation, the market is willing to pay for high-impact innovation.”