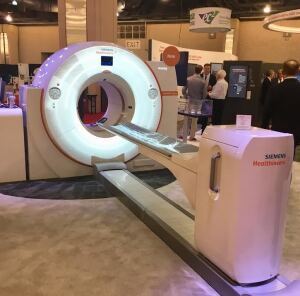 The university discovered that the system performs even better than originally reported – compared to Siemens’ internal testing, they found a 14 percent improvement in temporal resolution and a 16 cps/kBq increase in sensitivity.

Dr. Rudi Dierckx, department head at the university, is particularly excited about the system’s time-of-flight speed and spatial resolution because it could help better detect diseases.

“[With this system] you can see the four chambers of the heart very precisely, which is very unusual for a PET/CT scan on other systems,” Karin Karl, global product marketing manager for molecular imaging at Siemens, told HCB News. “You see the papillary muscles with very good detail, which is very exciting for our customers.”

She added that there is so much new information in these images that some users have to re-learn how to look at PET/CT images because there are details they have not seen before.

Due to its impressive temporal resolution and sensitivity, the Biograph Vision has the potential to reduce scan time by a factor of almost four. Its 78-centimeter bore also improves patient comfort and positioning.

At the meeting, Siemens also announced that the second installation took place three weeks ago at the University of Lausanne in Switzerland. Three sites are currently in contention for the third installation, which will be the first in the U.S.