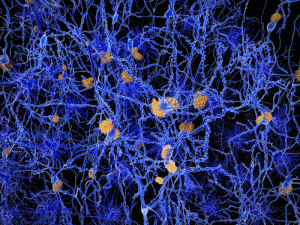 Cerveau Technologies is expanding its
production network for greater access
to research on the impact of a novel
imaging agent for neurodegenerative
diseases such as Alzheimer's disease
Cerveau Technologies Inc. is setting up camp in six new places throughout the U.S. thanks to a growing interest in a developmental and investigational tau imaging agent.

The Boston-based enterprise is expanding its production network to enhance access and opportunities in research for [18F]MK-6240, a novel contrast agent utilized in PET scans to assess the status and progression of neurofibrillary tangles (NFTs) within the brain as part of several neurodegenerative conditions such as Alzheimer’s disease.

“Cerveau is focused on increasing access to the transformative technologies that we believe have the potential to advance brain health,” Rick Hiatt, president and chief executive officer of Cerveau Technologies, said in a statement.

NFTs are composed of aggregated tau protein, the hallmarks of Alzheimer’s and other forms of dementia.

Consisting of 10 production sites throughout the U.S., Canada, Australia and Belgium, Cerveau has qualified six additional ones over the last few weeks in Hayward, California; Houston, Texas; Phoenix, Arizona; and Birmingham, Alabama, as well as at John Hopkins University in Baltimore, Maryland and Columbia University in New York City.

In addition, twenty other sites are undergoing capital expansion, technology transfer and startup processes to provide greater support to a variety of research and therapy clinical trial initiatives worldwide. Their locations include one in Canada, three in the U.S., four in Japan, four in Australia, four in Europe and four in China.

The growth of its production network, according to Hiatt, will support imaging biomarkers licensed by Cerveau and its partners for research and development.

“This expansion of the biomarker production network underscores our commitment to the broader scientific research community and our support of industry’s initiatives to combat neurodegenerative disorders,” he said.

Cerveau Technologies formed a number of partnerships this year to promote research for [18F]MK-6240, including one with the Kobe City Hospital Organization in Japan; another with Massachusetts General Hospital (MGH); and one with the University of Pittsburgh.