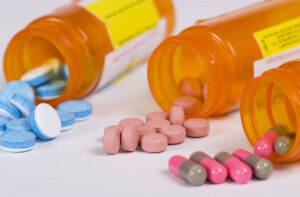 PDUFA collects fees from
drug manufacturers to fund
new drug approval process
(click to enlarge)
Washington -- The House of Representatives overwhelmingly passed reauthorization of the Prescription Drug User Fee Act (PDUFA), enhancing the FDA's safety programs, by a vote of 403-16. The bill, H.R. 2900, will next go to a conference committee to work out differences with the Senate version (S. 1082), which was passed in May 2007.

The bill revises user-fee programs for prescription drugs and medical devices, and strengthens the role of the FDA with respect to postmarket safety of drugs and devices, and for other purposes.

Regarding devices in particular, the bill appropriates an additional $7,100,000 for fiscal years 2008-2012, plus an inflation adjustment. The resources are aimed at collecting, developing, reviewing, and evaluating postmarket safety information on medical devices.

The FDA's traditional role in safeguarding drugs and devices had focused on approval, with rigorous pre-market regulation to ensure safety and efficacy before products are prescribed and sold in the U.S. However, recent cases have called drug safety into question after approval and marketing, most notably in the case of Merck's VIOXX, pointing to the need for the agency to strengthen its role throughout the product lifecycle. VIOXX was voluntarily withdrawn from the market by Merck in 2004 following safety questions raised about its cardiovascular risk in a study of arthritis drugs.

Industry advocates applaud the PDUFA legislation. "House passage of this important piece of legislation is a victory for American patients as they will continue to have timely access to the latest medical technology advancements. HR 2900 will enhance patient safety by providing FDA's device program with the financial resources it needs to meet its medical technology review commitments, while protecting future FDA appropriations and providing manufacturers with predictability regarding user fee rates," said AdvaMed President and CEO Stephen J. Ubl. "AdvaMed encourages the House and Senate leadership to quickly name members to a conference committee so that differences between the two chambers' versions of the legislation can be reconciled and a final bill sent to the President before the current user fee program expires on September 30, 2007." (AdvaMed, the Advanced Medical Technology Association, is a professional organization of medical device makers.)