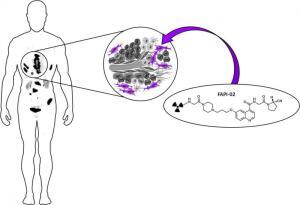 Radiolabeled small molecules bind to
fibroblast activation proteins in
cancer-associated fibroblasts found
within the tumor stroma
German researchers have developed a PET imaging method that may raise the bar on diagnosing certain cancers.

The method targets cancer-associated fibroblasts (CAFs), which have been linked to tumor growth and are present in over 90 percent of epithelial carcinomas such as pancreatic, colon and breast cancer. The team created a PET tracer based on a FAP-specific enzyme inhibitor (FAPI).

For a study recently published in the Journal of Nuclear Medicine, they tested the gallium-68-labeled FAPI tracer and a 18F-FDG PET tracer in mouse models as well as a proof-of-concept PET/CT study that involved three patients.

“The competing tracer is FDG, which is hard to beat,” Dr. Uwe Haberkorn of the University Hospital of Heidelberg, told HCB News. “However, we think that due to the high contrast [of] FAPI, [it] may be superior in peritonitis carcinomatosa, liver tumors/metastases, brain metastases, carcinoma of unknown primary, staging of breast cancer and head and neck cancer.”

The study results demonstrated that gallium-68-labeled FAPI has high tumor uptake and clears from the body at a fast rate. That means it generates high-contrast images and has a low chance of binding to healthy tissue in both animals and patients.

According to Haberkorn, issues arise when using 18F-FDG PET to diagnose lung cancer because inflammatory lymph nodes result in false positives. He believes gallium-68-labeled FAPI could be used instead.

“Besides cancer, FAPI may also be used for benign diseases with remodelons such as fibroses, artherosclerosis, rheumatoid arthritis, sarcoidosis, etc.,” he added.