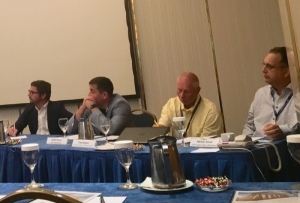 Panelists for our discussion on European
parts, service and equipment
A public medical center in France signed an OEM ultrasound equipment and service contract even though a third-party distributor was competing for the job with a competitive offer. The reason: "How do we know if you will still be here in three years?"

This was what the customer told Mehdi Smail, chief strategy officer of LBN Medical A/S, which would have supplied the unit to the distributor. Recounting the story in a panel discussion, “The Future of Independent Sales, Service and Parts in Europe,” at the 14th Annual European Meeting of IAMERS in Athens, Greece, Smail asserted that such a view of third-parties is hardly uncommon among healthcare providers in Europe.

“The customer would buy from a distributor or non-OEM organization but they would not trust a non-OEM organization to provide service for seven years,” he said. “In the end, they buy from the OEM because the deal is better. It illustrates how OEMs are considered the safe bet for service because customers are afraid that small companies may not be available long-term for service. That’s a big issue for us.”

Agreeing with Smail were other panelists Robert Piconi, executive chairman of Chronos Imaging LLC; Rafael Pizon, CEO of Medsystems; and Tom Spees, VP of market development at Richardson Healthcare, all of whom agreed this perception of impermanence was both a symptom and a cause of greater healthcare complexities in the EU marketplace

“I don’t think owners of the hospitals are aware that there are rival companies in the market that can do the service," said Pizon. "I think they go to the OEMs because they don’t see any other potential to save the money or to use the servicing group.”

In addition to a lack of awareness from providers, the European market is also hampered by the diversity of regulations and laws from one European country to the next. For example, Spain requires a license from the OEM before third-party service can be provided on an X-ray system, while the Romanian government prohibits the introduction of any tube by a third-party provider without first submitting it to nuclear authorities for homologation.

Once a third-party gains legal clearance to provide service, they often run into some of the challenges that have been highlighted in the U.S. involving manufacturer cooperation.

“To do service, you need to have technical manuals, be able to calibrate machines, have training, have parts, and in some cases, have specialty tools. It’s usually a puzzle around the availability of those critical inputs,” said Piconi, adding that proper infrastructures and greater scale of solutions must be implemented to address this issue. “In Europe, maybe there are 10 good parts suppliers – companies that will harvest the machine, test the part on a stage basis, and guarantee it for the same things that OEMs guarantee it for. I think Europe’s still immature on that front.”

But overall, is non-OEM service a growing trend in Europe? The panel was skeptical.

According to the audience however, in-house service is the wave of the future for equipment service in Europe. They indicated this in a survey concurrent with the discussion.

Most of the audience also agreed that the largest growth potential for the European third-party market lies in parts, followed by service, with equipment offering little opportunity.

Attendees saw greater opportunities for alternative service in Africa as well as the Middle East, which were found to have warmer perceptions of third-party and in-house servicing. The impact of China and its sophisticated robotics and AI capabilities were also addressed as potentially shaking up the third-party marketplace in big picture ways over the next few years.

The future of equipment maintenance

How COVID-19 has impacted the servicing of essential medical equipment

MITA continues to push for FDA regulation of third-party servicers