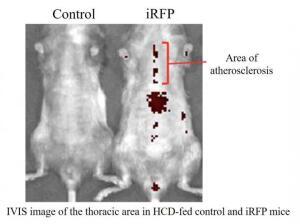 Using mice as test subjects, Japanese researchers have demonstrated the ability to visually measure the amount of atherosclerotic plaque developed over time and track its progression, enabling accurate evaluations of drugs for treating atherosclerosis and the potential analysis of likely risks posed by such plaque including reductions in blood flow.

"Because we can now clearly analyze the amount of plaque present and its change over time, our work should lead to more effective monitoring of how well anti-atherosclerotic drugs work," corresponding author Michito Hamada said in a statement. "This method can also reduce the number of experimental animals used because there's no need to sacrifice them and remove tissues for analysis at each time point within an experiment."

Though advances in medicine have provided better understanding of how plaque buildup occurs and ways to reduce it, diseases associated with atherosclerosis continue to be a major factor in the mortality rate.

The team induced atherosclerosis in mice by inactivating a fat and cholesterol-related receptor, placing each within one of three groups. Mice were also exposed to X-rays that destroyed the native cells of their immune system, with genetically engineered immune cells designed to exhibit fluorescence transplanted within them as replacements.

Each group was fed its own feeding pattern, with one receiving a high-cholesterol diet daily; another a diet that alternated between this and a normal one every other week; and a third that was strictly fed a normal one.

Using the intensity of the fluorescent signal exposed the stepwise variations in plaque quantity within each group, with clear increases in plaque amount shown in the one that consumed the unhealthy diet most frequently. The findings validate the tool's efficiency for not just confirming the presence of plaque but also the amount present.

"A main advantage of our approach is that the introduced immune cells, as macrophages, congregate in atherosclerotic plaque, so the level of fluorescence emitted by them strongly correlates with the amount of plaque that has formed," another author, Yoshihiro Miwa, said in a statement. "Because the expressed fluorescent proteins emit light in the near-infrared part of the spectrum, they can be detected at deeper locations within the body, such as the thoracic aorta."

The findings were published in the journal, Scientific Reports.