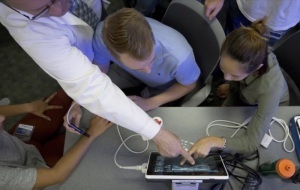 Utilizing Terason’s uSmart 3200T NexGen system, a Hitachi affiliation, pupils at Virginia Tech Carilion School of Medicine will be able to measure electrical activity through electrodes attached to the body while viewing images of the heart, as part of a designated ultrasound curriculum. In addition to its 3-lead ECG, the system will be equipped this month with a new 12-lead ECG component, made by Italian maker, Cardioline.

“It’s important to measure the electrical activity with ECG as well as visualize by ultrasound the physical condition of the chambers and valves of the heart,” John McNamara, director of anatomy instruction for the school, told HCB News. “The presence of ECG allows us to make the machine more versatile and expand the usage from just ultrasound. It was also cost efficient to make this purchase and extends its use in other educational areas.”

Whereas most medical schools briefly touch upon ultrasound skills in the later parts of their curriculum, VTCSOM begins teaching students within the first few weeks of school about the technology.

The first year primarily focuses on how to manipulate the machine and identify basic internal structures, before shifting to pathology and identifying structures that appear abnormal. Machines are accessible 24/7 for checkout to enable students to practice and hone their skills, providing them with better chances of excelling in away rotations and residencies.

In addition to its 12-lead ECG technology, the system provides sharper images, better magnification, ease in transporting and storing images, and a more user-friendly interface. Doppler will also be present in the ultrasound component to assist in visualizing blood flow and its velocity.

The program at VTCSOM is the third designated ultrasound curriculum in the country and comprises 12 systems that will primarily be used by first-years but also second-, third- and fourth-years too.

“Of 145 medical schools, 101 reported to the LCME [medical education accrediting body] in AY 2015-2016 that in some form there is ultrasound in their curriculum. Currently, however, few medical schools have a complete "curriculum," said McNamara. “Most schools offer a few hours of training at some point during undergraduate or graduate medical education. There are also schools that offer sonography curricula, such as community colleges.”