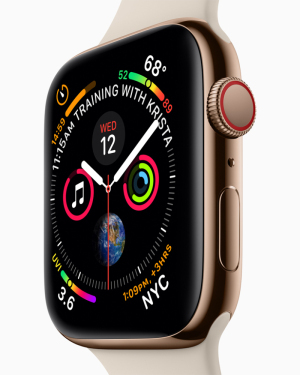 Apple and Zimmer Biomet have joined forces to create and launch an app to help in the management and recovery from knee and hip replacements.

The Zimmer Biomet mymobility app uses Apple Watch to help the surgical team and a patient stay more connected. The app is now undergoing clinical trials – with as many as 10,000 U.S. participants – to assess its impact on outcomes and costs for joint replacement patients.

"We are incredibly excited to work with Apple to transform the knee and hip replacement experience for patients and surgeons," said Zimmer Biomet president and CEO Bryan Hanson in a statement.

The study will be one of the largest evidence-gathering clinical studies in orthopedic history, he noted. It will involve four hospitals and a dozen other facilities in states including Massachusetts, California, Colorado and Michigan. Data gathered on participating patients before and after surgery will include heart rate, steps walked and hours standing.

"We believe one of the best ways to empower consumers is by giving them the ability to use their health and activity information to improve their own care," said Apple COO Jeff William, adding that the data connection will permit “seamless” data sharing between patient and clinical team, enabling ongoing care “in a way not previously possible through traditional in-person visits.”

There are over a million knee and hip replacements in the U.S. every year and industry figures suggest the figure will rise to 3.5 million by 2035.

To handle the load – and better standardize care – such a wearable app-based recovery monitoring that includes both biometric data and information specific to the replacement could provide “a virtual and continuous care team on a patient's wrist,” the company advised.

The app is the result of a two-year effort between Zimmer Biomet and Apple. Because of its global position supplying materials for 25 percent of knee replacements and like shares in hip, shoulder, foot, dental and spine markets, Zimmer Biomet was able to provide key insights from the healthcare sphere to Apple during its recent focus on delivering health information via its watch.

In September, Apple unveiled its new health-targeting Series 4 watch – able to look into your heart – or at least monitor its rhythms, thanks to a pair of ECG apps that work with it.

The FDA-approved electrocardiogram apps, also given the thumbs up by the American Heart Association, can pick up atrial fibrillation, unusually slow or unusually fast heart rates and record the data for use by clinicians. And if you fall and can't get up, the phone can know that and even make an emergency call.

“The ability to access health data from an on-demand electrocardiogram or ECG is game-changing, especially when evaluating atrial fibrillation – an irregular and often rapid heart rate that can increase a person’s risk of stroke, heart failure and other heart-related complications,” Ivor Benjamin, president of the American Heart Association said.

Apple was even more effusive, with Williams telling the audience at the news conference at the company's Cupertino HQ, “the Apple Watch has become an intelligent guardian for your health.”