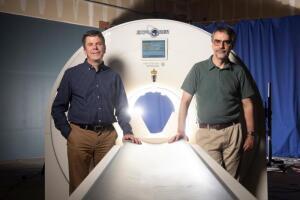 Cherry (left) and Badawi with a
mockup of the EXPLORER
Courtesy: UC Davis
The first-ever whole-body PET/CT scanner has delivered its first images, marking the first time a medical imaging scanner has captured a 3D image of the entire human body simultaneously.

Simon Cherry, a professor of biomedical engineering and radiology at UC Davis, where the scanner was developed, was “stunned” as he gazed at the very first scan produced by the EXPLORER system.

In less than a minute it produced an image with a degree of quality never before seen from typical PET scanners, yielding a depiction of the glucose metabolism process throughout the whole body.

“We had some predictions but I don’t think anything prepared us for the very first scan when we got it. We were seeing things we had never seen before in a PET scan, and without a lot of optimization,” Cherry told HCB News. “That, after so many years, was a very gratifying moment.”

The idea for the scanner originated in 2005 with Cherry and Ramsey Badawi, chief of nuclear medicine at UC Davis Health and vice-chair for research in the department of radiology. Today, the two are hopeful that EXPLORER will usher nuclear medicine and molecular imaging into a new era.

Made up of roughly 8 to 10 times more materials and electronics than a standard PET scanner, EXPLORER is capable of producing whole body images in as little as 20 to 30 seconds at a speed of up to 40 times faster than that of a typical PET scanner.

Radiation is also up to 40 times lower than with a conventional PET scan, and is the equivalent of the exposure experienced on a transatlantic round-trip flight. Being able to conduct the scans at such unprecedented speeds is part of what they are most excited about.

“We’ll capture images of the entire body in scans of less than a minute, so you’re getting scan times that are very much like a CT scan now. That was never possible in nuclear medicine before. They are always 15, 20 or 30 minutes long,” Cherry said. “People have to stay still for that long, which they can’t, creating motion and blurring from movement. The ability to get very fast scans means for example that in a lung cancer patient we could do a PET scan with breath hold which would essentially freeze the respiratory motion and we’d get to see small lesions of the lung much better.”
1(current)
2