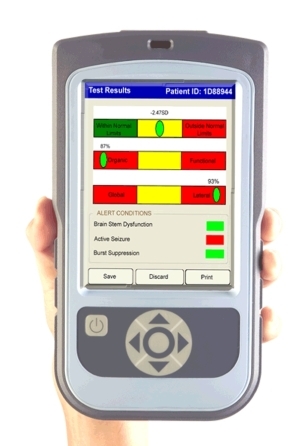 The device, called BrainScope, is based on studies by E. Roy John, Ph.D., Professor of Psychiatry and Director of the Brain Research Laboratories (BRL) at NYU School of Medicine. Dr. John has spent a great deal of his career studying how to translate EEG tracing recordings of the brain's electrical activity on an electroencephalograph into numbers called quantitative EEGs, or QEEGs. This gave many scientists an objective and standardized way to assess cognitive functions. Dr. John has studied QEEGs and their clinical applications, and has collected and analyzed brainwave recordings from approximately 20,000 patients. From this, he has established normal ranges for QEEGs across the life span and correlated deviations from these norms with a variety of neurological abnormalities and disorders, including concussions. All of this evidence has laid the groundwork for BrainScope.

BrainScope is made up of an adhesive strip that contains six electrodes that are connected to a small computer. When a head injury occurs in an individual, a medical first responder places the electrode strip on the injured patient's forehead. BrainScope then collects a sample EEG and computes a large number of QEEGs that are compared to a databank of normal scores. Almost immediately, the BrainScope's color display indicates whether any functions deviate from the norm.

Dr. John said that it is not uncommon for mild-to-moderate concussions to go unnoticed, because they cause no noticeable wound and symptoms such as nausea quickly disappear. He said that the slight brain dysfunction associated with these concussions is usually not seen - even to sophisticated imaging scanners that include CTs and MRIs. He went on to say that such scans must be carried out in a hospital and are usually performed hours or days after the initial injury, delaying treatment.

BrainScope is intended to be used as a triage instrument on battlefields, at sporting events, in emergency rooms and in clinics. Dr. John feels that the high number of concussive brain injuries caused by improvised explosive devices in Iraq, and the number of homeless combat veterans with undiagnosed brain injuries, makes the BrainScope a crucial instrument on the battlefield, allowing soldiers with less obvious brain injuries to receive the proper care they need and improve their changes of full recovery.

As far as sports injuries go, the Centers for Disease Control and Prevention has reported that approximately 300,000 sport-related concussions occur every year in the United States, and that many players with concussions receive little or no treatment and are sent back to play before full recovery. Unfortunately, repeated mild brain injuries that occur within a brief period can eventually be catastrophic - even fatal - according to the CDC. BrainScope could also play a life-saving role for thousands of athletes.

BrainScope is in preclinical testing at Bellevue Hospital Center in New York City, Case-Western Reserve in Cleveland, and Washington University in St. Louis. In emergency room settings, doctors are determining whether the device is useful in achieving rapid assessments of whether or not brain dysfunction is present. Clinical trials are planned for this fall. BrainScope is based on patents held by NYU and is being manufactured by BrainScope, Inc., a privately held company located in Chesterfield, MO.