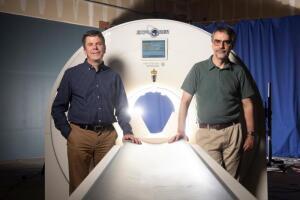 The uEXPLORER is the first scanner in
the world that can image the entire
human body simultaneously.
Courtesy: UC Davis
United Imaging Healthcare has received the FDA sign of approval to begin distributing its uEXPLORER total-body PET/CT scanner in the U.S.

It is the first system in the world that can create a 3D image of the entire human body at one time. Its formation is the result of a years-long dual effort by United Imaging Healthcare and the EXPLORER Consortium, run by Simon Cherry and Ramsey Badawi from the University of California, Davis.

“Once we install the scanner in mid-2019 we can serve our patients in the Sacramento region by giving them access to this new technology,” Cherry, a professor of biomedical engineering and radiology, told HCB News. “We had originally thought EXPLORER might primarily be used as a tool for research, but with FDA clearance EXPLORER can now have a much broader impact in our community and, we hope, across the nation.”

That impact is expected by Cherry and UIH to appear in a wide variety of fields, from improving diagnostics to tracking disease progression to studying new therapies. One current use, for instance, is the ability to better visualize cancer that has spread beyond a single tumor site. Researchers are also expecting it to be used to measure blood flow across the entire body, and to study inflammation and infections, as well as immunological and metabolic disorders.

The combination of CT and PET capabilities will enable clinicians to study the anatomy and the functioning relationship between tissues and organs within the body, with the scanner able to image a whole patient within 15 to 30 seconds. This saves a tremendous amount of time compared to conventional PET scanners which require 10 to 20 minutes as they image parts of the body, and reduces the chance of blurriness in images by requiring patients to only hold one breath during procedures.

Equipped with more than 560,000 detector elements and close to 54,000 light sensors and channels of electronics, uEXPLORER possesses 40 times greater sensitivity than current clinical PET/CT scanners, a quality that is expected to create longer lifespans for radiotracers and reduce the amount of dose needed.

"We expect both hospitals and imaging providers that handle a high volume of patients and those who are interested in developing new protocols and applications in Molecular Imaging to show the greatest interest in uEXPLORER," Jeffrey Bundy, chief executive officer for UIH North America, told HCB News. "Now that we have received FDA clearance, we will be working on market pricing for the uEXPLORER."
1(current)
2