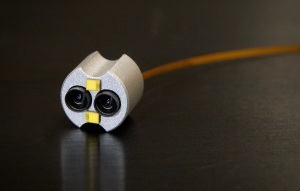 The two announced the launch of a new platform at the Medical Design & Manufacturing (MD&M) West tradeshow in California that will allow manufacturers to seamlessly integrate stereoscopic 3D imaging into endoscopes.

“When diagnosing certain diseases within the body using endoscopy, objects are seen more clearly when they are in 3D rather than a flat 2D image. Also, during therapeutic endoscopy procedures such as surgery or polyp removal, the surgeon needs a perception of depth,” Tehzeeb Gunja, principal marketing manager at OmniVision, told HCB News. Having a 3D view allows the surgeon to better know the correct depth at which to cut or ablate, or even when suturing. This depth is provided by stereoscopic 3D imaging.”

The single camera of a traditional endoscope hinders its depth, thereby increasing risks during endoscopic procedures.

The platform combines together two CMOS image sensors and an image signal processor (ISP) from OmniVision with a light control board for LED illumination and camera control unit from Lighthouse, an integration that reduces price and overcomes complexity and size constraints that have hindered the adoption of 3D endoscopy.

From OmniVision comes two 0H02A image sensors with 1.4-micron pixel PureCel in a 1/6-inch optical format to support alternate-row high dynamic range for high-quality imaging of bright and dark spots. The sensors are stereo-ready, have FrameSync technology to ensure accurate synchronization of the sensors and on-chip pulse width modulation for the sensors to drive the LEDs at the endoscope’s distal tip, while anti-reflective coating on the cover glass removes ghosting.

They also come in compact chip-scale packages with two-lane MIPI output, and have low power consumption for low heat at the distal tip. Each provides 2-megapixel, 1080p resolution, allowing medical teams to stream high-quality images on a large television monitor at 60 frames per second. In addition, the Lighthouse platform is adaptable to use the sensors with 720p or 4K/2K resolution, depending on whether the medical OEM prioritizes cost or resolution.

Another component, the OVMed ISP back-end processor offers stereo 3D vision, and with its compact form, fits inside the camera control unit/video processor unit. Its integrated design includes analog-to-digital converter and dual-channel ISP and PC interface for best-in-class image quality and feature set. The dual nature of its OmniVision image sensors is supported by an input interface, while a dual USB2.0 interface backs the output of video.
1(current)
2