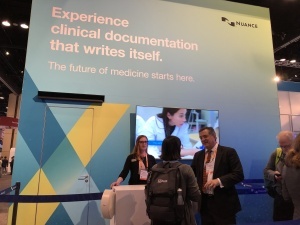 Orlando was an appropriate venue for Nuance Communications to unveil what the company is calling the “exam room of the future” at HIMSS 2019, showcasing the future release in an enclosed theater in the company’s booth at the Orange County Convention Center.

The staged doctor’s appointment felt almost like a callback to Walt Disney’s Carousel of Progress, still part of the lineup at the Florida theme park’s Magic Kingdom.

The showcase (during which photos were not allowed) includes two actors portraying a patient and doctor who are discussing the patient’s knee pain. As they talk, a screen behind them shows that everything they’re saying is being recorded. The doctor is not typing notes into a computer screen and will not need to dictate notes after the exam.

“That’s really the holy grail here,” Peter Durlach, senior vice president of strategy and new business development for the healthcare division at Nuance Communications, told HCB News during an interview at the show.

The program is being trained for accuracy on thousands of real-life conversations between patients and physicians and it will be refined through the work of virtual scribes. During the presentation, the software originally spelled a nonsteroidal anti-inflammatory drug called Mobic as two words, but then corrected itself.

“We are holding ourselves to a very high standard on accuracy,” Brenda Hodge, chief marketing officer for healthcare at Nuance, told HCB News. “It’s very different than your Alexa. If I ask how the weather is and I get something completely different in an answer, there’s no real harm. When you’re talking about putting a patient on 100 milligrams of Mobic and it gets that wrong, there’s a problem. We know there’s a high accuracy bar that we have to meet because it’s healthcare.”

The product, which the company plans to release in 2020 after a pilot at Rush University Medical Center, builds on its Dragon Medical One cloud platform.

The company also announced at HIMSS that EHR vendor MEDITECH is integrating Nuance’s Dragon Medical Virtual Assistant – which doctors can use to verbally search a patient’s chart for lab results, vital signs and medications, and also queue orders – into its Expanse EHR software.

“They don’t have to dig through the chart, which will take minutes of their time,” Hodge said of the virtual assistant product.