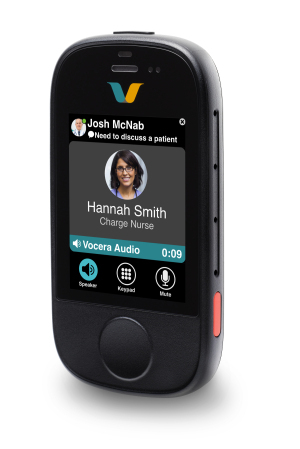 Combining the ease of a voice-controlled communications badge that has become ubiquitous in hospitals and the capabilities of a smartphone, healthcare communications company Vocera has debuted a new hands-free wearable device that it calls a Smartbadge.

The company showcased the device, which features a 2.4-inch touchscreen with haptic touch call button, and made it generally available at HIMSS in Orlando.

The idea behind the badge is that nurses don’t have to reach in their pockets to get their phones to call someone, leaving their hands free for other tasks. The Smartbadge also has a text messaging feature and has clinical alerts and alarms.

Conrad Price, director of product management at Vocera, said the company improved upon the previous device. For example, the previous Vocera Badge had the user press the call button twice for a distress call. The Smartbadge includes a dedicated panic button.

The larger screen also makes it easier to scroll through alerts and messages vertically, while the Smartbadge is about 30 grams heavier than the previous 60-gram badge.

“We know that a lot of the information that’s coming through now is very visual in nature,” Price told HCB News. “So, we’ve added a larger screen. … Most people are quite surprised by how light it is upon their first visual inspection of it.”

The company is also looking to use the device to reduce alarm fatigue in hospitals.

Brent Lang, president and chief executive officer of Vocera, said the software that comes with the Smartbadge is designed to “provide context” around the alerts provided by the clinical systems.

Rules can be set that, for example, limit alarms to only patients with a high risk of falling, or location tracking can sense whether a particular nurse is already in the room with the patient. Caregivers can also put on a Do Not Disturb mode if they are already busy.

“What we’ve done in the software is we’ve built in intelligence to be able to figure out who’s already busy and therefore, who’s the right person to be routing a particular alert or alarm or message to,” Lang told HCB News. “That intelligence in our software then gets manifested onto the screen of the device once it gets routed to the appropriate person. I think it’s really the combination of the software and then the new form factor that delivers the better patient care for the end user.”