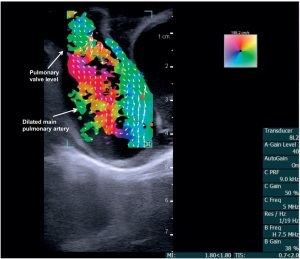 Tested by biomedical engineering researchers at the University of Arkansas in conjunction with cardiologists at Arkansas Children’s Hospital, vector flow imaging has been found to construct detailed images of the internal structure and blood flow of babies’ hearts.

"MR is the gold standard modality for these flow measurements, but human babies have to be fully anesthetized to undergo an MR scan," Morten Jensen, associate professor of biomedical engineering at the U of A, told HCB News. "In addition, time consumption, access, and cost are factors that need to be considered. Compared to MR, ultrasound is fast, inexpensive, and does not require the involvement of anesthesiologists.

The images produced with vector flow imaging can be still or moving, and taken at different angles. In comparison, conventional ultrasound is unable to obtain details of blood flow within the heart, mainly because it lacks the ability to align the ultrasound beam with blood-flow direction.

The multidisciplinary team tested the approach on two pigs, using a BK5000 Ultrasound system with built-in vector flow imaging capabilities. One had a healthy, structurally normal heart, while the other had congenital heart disease due to a narrow pulmonary valve and a hole within its heart. Vector flow images were compared to direct examinations of both pigs.

The technology was then applied on two three-month old babies, one of which also had a structurally normal heart, while the other had an abnormally narrow aorta. The technology demonstrated total transthoracic imaging of tissue and blood flow on both patients at a depth of 6.5 centimeters, revealing abnormal blood flow and detailed cardiac anomalies in the one with congenital heart disease.

While a positive outcome, the technology is limited due to its inability to be used on adult patients. Jensen, however, believes the current study may help change this in the future.

"Vector flow imaging has a limited penetration depth compared to conventional ultrasound, meaning it can't provide the images very deep into the tissue. The distance from the surface of the chest to the heart in human babies is much smaller than for adults," he said. "In the future, this might become possible in adults as well."

Roughly one percent of all babies are born with a form of congenital heart defect, though a majority never experience significant impact as they grow into adults and when they reach old age.

Additional studies are planned to further quantify images with this technology.

The findings were published in the journal, Progress in Pediatric Cardiology.