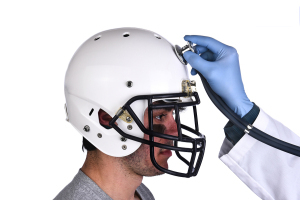 "Currently if is not possible to assess abnormal tau accumulation in the brain during life. We must perform an autopsy of the brain and look for the abnormal tau," Charles H. Adler, professor of neurology at Mayo Clinic College of Medicine at the Mayo Clinic Arizona, told HCB News. "That is why developing the PET scan is so critical to the field."

A neurodegenerative disease, CTE is associated with a history of repetitive head impacts, including those that may or may not be associated with concussion symptoms experienced by American football players. Its diagnosis can only take place following the death of a person, through a neuropathological exam. The build-up of an abnormal form of tau protein in a specific pattern in the brain is the hallmark finding.

The researchers applied experimental flortaucipir PET scans to evaluate tau deposition in the brains of 26 living former NFL players between the ages of 40 and 69, who experienced cognitive, mood and behavior symptoms. They also assessed 31 men of the same ages without symptoms or histories of traumatic brain injuries.

Tau PET levels were found to be significantly higher among the players, compared to the control group, with the tau found in parts of the brain that have been confirmed in post-mortem cases to be areas impacted by neuropathologically diagnosed CTE.

The study authors also performed FDA-approved florbetapir PET scanning to assess amyloid plaque deposition, and found no difference between both groups, suggesting that symptoms experienced by athletes who have suffered repetitive head injuries in the past do not signal the onset of Alzheimer’s disease, another neurological condition characterized by the presence of tau and amyloid accumulation. Past diagnoses of CTE support this assessment, with the disease based, in part, on the pattern of tau deposition and a relative lack of Amyloid plaques.

"There is an interest in tau PET tracers with improved ability to detect the tau PET changes associated with not only AD, but with the tau pathology associated with certain other neurodegenerative diseases and with CTE," study co-author, Eric Reiman, executive director of Banner Alzheimer’s Institute, told HCB News.
1(current)
2