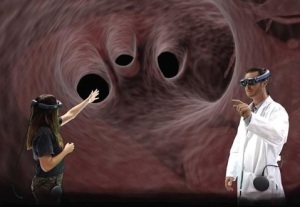 Made up of Precision VR patient-specific models and the Magic Leap One spatial computing headset, the platform enables clinicians to stroll with their patient "inside" the specific anatomy of the latter, which is augmented into a virtual model within their shared physical space, encouraging shared decision-making and greater collaboration between the two.

"Magic Leap is thrilled to see our health ecosystem expand with solution providers like Surgical Theater, who have already demonstrated great success in VR for patient engagement. They continue to push the boundaries of Magic Leap One's capabilities and drive the adoption of the leading spatial computing platform into the hands of revolutionary physicians and enthusiastic patients," Jennifer Esposito, vice president of health at Magic Leap, said in a statement. "Our vision at Magic Leap is to enable this technology for a wide range of health applications, and we're really looking forward to seeing the novel approaches our developer community is taking to increase patient engagement and satisfaction."

A visualization platform, Surgical Theater’s Precision VR system generates 360-degree, virtual reality reconstruction of a patient’s anatomy, based on data within their chart. Magic Leap One builds upon these visualization capabilities by superimposing 3D computer-generated images for greater interaction and clearer understanding among patients.

The use of augmented reality enables clinicians and patients to remain physically aware and keep contact while walking through the 360-degree virtual model, and is expected to provide seamless workflows, charting transparency, increased efficiency and improved patient satisfaction to users.

"The evolution of Surgical Theater's Precision VR® technology has provided our hospital partners with tremendous value in the ability of surgeons and patients to walk inside the 360˚ model," said Moty Avisar, CEO and co-founder of Surgical Theater. "It has been proved to achieve superior patient understanding, which has resulted in improved patient satisfaction and reductions in patient out-migration."

The combination of both tools was previously discussed and showcased last month at another conference, the American Association of Neurological Surgeons Annual Meeting in San Diego.

"In the OR, overlaying the 360˚ model onto the surgeons microscopic/endoscopic optics, enables them to see, and therefore, preserve a hidden vessel or nerve that will be exposed during a tumor resection,” Moty Avisar, CEO and co-founder of Surgical Theater, said in a statement at the time.