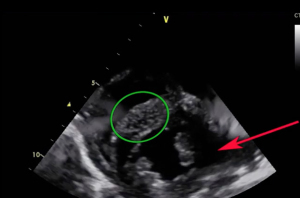 Electrast 'lights up' only when in
contact with the heart's electrical
system, enabling sharper images to
be taken
Taking sharper images to identify early signs of cardiovascular disease may soon be possible with the use of a heart-activated contrast dye developed by researchers at Drexel University.

Named Electrast, the agent is composed of the same materials as cell membranes, and activates only when coming into contact with the electric field generated by the heart, enabling it to manage its own lighting to capture specific and detailed images of blood flow, an important indicator of overall health and problems within the heart. This stands in contrast to conventional dyes which illuminate the entire frame, making the image too overexposed to read accurately at times, even when injected in veins close to the heart.

"Electrast greatly enhances a standard echocardiogram study," Dr. Brett Angel, a cardiologist and faculty member in Drexel’s College of Medicine who helped develop and test Electrast, told HCB News. "It allows a practitioner to image real-time microcirculation perfusion of the myocardial tissue, this not only enhances the basic anatomical differentiation of the image as it makes the heart muscle specifically more clearly visible on ultrasound (over 50% of current echos are poor image quality and often suboptimal to reliably get even basic information from), but it also shows which areas of the heart muscle are receiving adequate blood supply. Areas of under-perfused muscle become clear, as do areas of myocardial scar or infarction with no perfusion."

More than 600,000 Americans die annually from heart disease, with many already incurring permanent damage by the time they begin experiencing chest pains. Even with modalities such as ultrasound, echocardiography and CT, sound and video produced is distorted to the point where clinicians are basically listening to echoes and assessing shadows, making it difficult to examine blood flow in small vessels, and resulting in accurate diagnoses of heart disease in only about 70 percent of cases.

This is primarily due to the fact that tracers immediately illuminate upon injection into the bloodstream. Many, as a result, must be introduced into arteries via catheter tubes. In addition, those used in CT and PET imaging are harmful radioactive chemicals, a fact which makes doctors hesitant to perform exams on patients, especially those who may not be able to handle the physical stress.

Electrast consists of a droplet of perfluorocarbon, an inert chemical commonly used in enhanced ultrasound imaging, inside a lipid molecule. The lipid enables the capsules to move freely in the bloodstream without triggering an immune response, and releases the perflurocarbon tracer upon coming into contact with the electrical field of the heart. Ultrasound is then applied, with the sound waves deflected by the droplets. The waves pass through the soft tissue of the heart, creating the contrast necessary to produce an image.

It can be used any place that an echocardiogram is performed, and is expected by Angel to add great value to studies completed in cardiology outpatient offices and for hospital cardiac imaging services, as well as transform the practice of functional stress testing to an easily attainable exam in-office, on-demand and in real time.

"The fact that this agent is proposing to be safe enough for immediate serial administrations would make it unique among cardiac imaging agents (most others are either radioactive or toxic and therefore carefully regulated for sparse use). The fact that Electrast proposes to be dual-activated — electrically activated in the presence of ultrasound — makes it very specific and sensitive, greatly enhancing its ability to act as a valuable screening test," said Angel. "I see Electrast being used more frequently than any current cardiac imaging enhancer once it eventually reaches the clinic."

The findings around the development of Electrast are available in the journal, Applied Acoustics. They will be presented at the 34th Advances in Contrast Ultrasound International Bubble Conference in September.