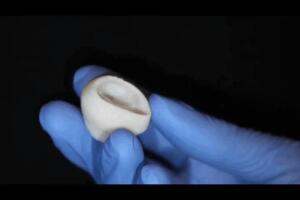 The new method enables 3D
printed tissues to be designed
with collagen
Providers may soon be able to offer patients 3D implants with tissues composed of collagen — the major structural protein in the human body.

Researchers at Carnegie Mellon University have developed a first-of-its-kind technique called FRESH (Freeform Reversible Embedding of Suspended Hydrogels) for designing and composing implants with the protein, based on MR scans of the desired organ. The method is touted by its creators as a step in the direction of developing full-sized, 3D printed, adult human hearts.

"What we've shown is that we can print pieces of the heart out of cells and collagen into parts that truly function, like a heart valve or a small beating ventricle," said Adam Feinberg, a professor of biomedical engineering (BME) and materials science and engineering at Carnegie Mellon, whose lab performed this work, in a statement. "By using MR data of a human heart, we were able to accurately reproduce patient-specific anatomical structure and 3D bioprint collagen and human heart cells."

Organs such as the heart rely on an extracellular matrix to hold the specialized cells that compose them together by providing structure and biochemical signals that enable the cells to carry out normal functions. Traditional biofabrication methods, however, are unable to rebuild these complex ECM networks.

The aim behind the method is to produced bioengineered organs that more closely replicate natural structures within the body, compared to current implants. This is especially important for heart transplants, which more than 4000 U.S. patients require. Millions worldwide also require them but are ineligible for waiting lists.

The FRESH 3D bioprinting method deposits collagen layer-by-layer with a support bath of gel, allowing the collagen to solidify in place before being removed from the support bath. The support gel is easily melted away by heating it from room to body temperature following the completion of the print, enabling researchers to remove it without damaging the printed structure made of collagen or cells.

The method, however, is not limited only to collagen and can be carried out with a range of soft gels, such as fibrin, alginate, and hyaluronic acid. The designs are also open-source, enabling all levels of expertise from medical labs to high school classes to build low-cost, high-performance 3D bioprinters.

Since its establishment, the method has enabled researchers to overcome many challenges faced in 3D printing today, and to achieve high resolution and fidelity using soft and living materials. Feinberg believes it could bring many applications to a variety of areas, from wound repair to organ bioengineering.

"Really what we're talking about is the convergence of technologies," he said. "Not just what my lab does in bioprinting, but also from other labs and small companies in the areas of stem cell science, machine learning, and computer simulation, as well as new 3D bioprinting hardware and software. It is important to understand that there are many years of research yet to be done, but there should still be excitement that we're making real progress toward engineering functional human tissues and organs, and this paper is one step along that path."