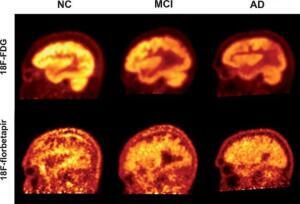 PET imaging for brain glucose
consumption may be a better indicator
of Alzheimer's progression than
amyloid PET imaging, says study
A new study says researchers may want to pay more attention to brain glucose consumption, compared to amyloid protein accumulation, when assessing the progression and severity of Alzheimer’s or mild cognitive impairment.

Researchers at the Perelman School of Medicine at the University of Pennsylvania claim that measuring brain glucose consumption with the standard fluorodeoxyglucose (FDG) PET tracer may provide more insights on cognitive function in patients than that of florbetapir-PET scans, which measure amyloid protein deposits in the brain.

"Both florbetapir-PET and FDG-PET are approved diagnostic methods for Alzheimer's disease, and both appear to be effective in indicating some sort of cognitive impairment. However, we have now shown that FDG-PET is significantly more precise in clinical studies, and it is also available for routine use with modest costs," said the study's co-principal investigator Abass Alavi, a professor of Radiology at Penn, in a statement. "Our results support the notion that amyloid imaging does not reflect levels of brain function, and therefore it may be of limited value for assessing patients with cognitive decline."

The sixth leading cause of death in the U.S., Alzheimer’s disease affects up to 5.8 million Americans and is the most common reason for the onset of dementia. Clinicians who search for early signs of the disease have increasingly turned to PET as a tool for diagnosing and monitoring dementia, as well as MCI, a condition that occurs prior to dementia.

Recent studies, however, have called into question the effectiveness of amyloid imaging for assessing the disease, finding large amounts of the clumped-together peptides in healthy, non-demented individuals. In addition, the removal of amyloid from brains of Alzheimer’s patients was found in clinical trials to cause no change in or worsen cognitive performance.

The study consisted of 63 individuals, 19 of whom were clinically diagnosed with Alzheimer’s, 23 with MCI, and 21 who were healthy. Each underwent an FDG- and florbetapir-PET scan, before completing a Mini Mental Status Examination, a diagnostic exam for detecting and assessing the severity of cognitive impairment. Researchers then used a novel "global quantification approach" to generate data from five different brain regions and align it with MMSE scores.

"Amyloid imaging has a value in diagnosing or ruling out Alzheimer's disease, but it's a bit like all or nothing. Our study shows that it can reveal disease, but you wouldn't be able to differentiate between someone who had very mild or very severe symptoms," said co-principal investigator Andrew Newberg, a professor of Radiology at Thomas Jefferson University, adding that the findings have important implications for clinical research.

This, however, should not be seen as encouragement to abandon amyloid imaging,” says Alavi. "Right now, FDG is king when it comes to looking at brain function, not only in Alzheimer's disease, but also diseases like vascular dementia and cancer.”

The findings were published in the August edition of Journal of Alzheimer’s Disease.