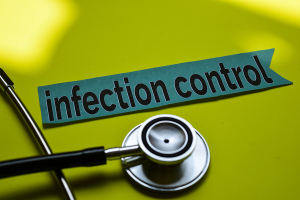 If you’ve worked in a hospital, you’ve probably experienced this scenario: an elderly patient arrives, displaying worrisome symptoms such as confusion and memory loss despite typically having normal cognition. The patient’s caregivers are at a loss when they don’t respond to the usual treatment for these symptoms and now they’ve ended up in your hospital bed. After undergoing many rounds of testing an unexpected cause is identified — a urinary tract infection (UTI).

UTIs are merely one example of how disruptive an infection can be and how healthcare facilities can struggle to quickly identify it and prescribe treatment. Healthcare institutions are currently grappling with a challenge: how can we diagnose and limit the transmission of pathogens more effectively? Elderly patients are considered high-risk when it comes to multi-drug resistant pathogens (MDROs). They are more likely to be using medical devices, such as catheters, and can be physically or cognitively impaired and unable to effectively communicate symptoms and discomfort to their caregivers and doctors.

The benefits of proper infection control are well-known — reducing transmission and limiting the number of patients afflicted by a particular strain are primary goals. Spotting and treating infections faster and more effectively cuts down on a hospital’s costs by limiting the number of antibiotics used and hours of productivity spent trying to find an accurate diagnosis. Misdiagnoses and misuse of antibiotic treatments can end up totaling more than $20 billion annually — a huge financial burden to healthcare facilities across the U.S.

Rapid diagnostics & bioinformatics in action
New and emerging technologies in the diagnostic space enable us to properly identify infection strains earlier and tap into pathogen data to gain insights into which treatment courses might be most effective. In significantly less time than existing diagnostic tests, a combined rapid diagnostic and bioinformatic platform is capable of detecting and identifying multi-drug-resistant pathogens and precisely guiding first-line antibiotic therapy.

Let’s revisit the UTI example briefly. Currently, there are about 10 million UTI cases each year, roughly nine million of which are routinely manageable and can typically be treated with frontline antibiotics. However, one million or more cases are considered “complicated” and generally won’t respond to the same courses of antibiotics that doctors and nurses fall back on. Unsurprisingly, high-risk patients in long-term care are more likely to be afflicted with complicated UTIs. Delayed diagnosis of these infections and misuse of antibiotics result in dangerous cognitive side-effects, lengthy hospital stays and increased risk of transmission.
1(current)
2
3