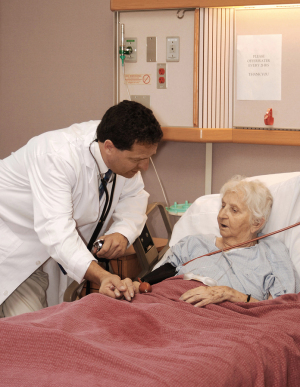 That’s the claim made by researchers at The Mount Sinai Hospital, who found through a six-center study that such training could improve communication between doctors and heart failure patients and increase the number of end-of-life care discussions, also known as advance care planning.

“The education provided clinicians with a set of skills to improve their communication with patients,” principal investigator and lead author Nathan Goldstein, professor of geriatrics and palliative care at the Icahn School of Medicine at Mount Sinai, told HCB News. “Before, the clinicians may have felt it was inappropriate to discuss management of the devices given the patient’s clinical status, or they may not have had time during a visit to have the discussion. These conversations can also be long, complex, and emotionally challenging for both the clinicians and patients.”

Though an estimated 100,000 patients receive implantable cardioverter defibrillators annually, multiple studies show that conversations about turning off their shocking function at the end of life rarely occur. Many patients as a result are shocked by their devices as they are dying, adding to their pain and upsetting their families.

To address this issue, Goldstein developed a 90-minute educational intervention focused on advance care planning and steps for deactivating a patient’s ICD, and supported with an automated electronic medical record reminder system. It also taught standardized communication techniques such as asking open-ended questions and how to respond to patients’ emotions during conversations about serious conditions.

“The workshop included a discussion of the natural disease course of HF and its complex trajectory, including how its unpredictability can create barriers to initiating advance care planning conversations and a discussion on strategically communicating with patients and families about ICD management,” said Goldstein. “Examples included specific communication techniques that participating clinicians could adopt in their own practices.”

The trial, known as WISDOM, was conducted between September 2011 and February 2016, with clinicians at three hospitals receiving the training and those at three others not receiving it. A total of 525 advanced heart failure patients with ICDs were included, with 301 at intervention hospitals and the remaining 224 at control hospitals.
1(current)
2