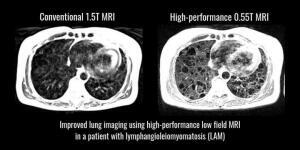 Researchers at the National Institutes of Health designed such a system by modifying an already built Siemens Healthineers’ MR system. They found that the adjustment made the solution more compatible with implants such as pacemakers or defibrillators, and interventional devices that greatly enhance image-guided procedures for diagnosis and treatment.

"In the traditional cath lab setting, procedures such as diagnostic heart catheterization in adults and children, treatment of arrhythmias, and structural heart interventions rely on metal devices engineered with the correct mechanical properties for the procedures," Adrienne Campbell-Washburn, staff scientist in the cardiovascular branch at the National Heart, Lung, and Blood Institute, part of the NIH, told HCB News. "We hope to be able to accomplish similar procedures under MR-guidance."

Metal devices such as interventional cardiology tools often are at risk of heating up when used with high-field systems. This prevents the use of MR-guided therapeutic approaches. But with low magnetic fields, these tools can be used in real-time, image-guided procedures such as heart catheterization.

The system also improved lung imaging, which has been notoriously difficult according to the researchers, due to distortions created by air in the MR images. They were able to observe the oxygen within the tissue and blood, and use it as a contrast agent to better study the structure and function of the organ.

The group developed the device by reducing the magnetic field of Siemens Healthineers’ MAGNETOM Aera from a strength of 1.5T to 0.55T. The modern hardware and software were maintained.

It then tested the system by using it to scan objects that mimic human tissues, before applying it on healthy volunteers and patients with diseases. Comparing its images to ones obtained at 1.5T, researchers were able to view lung cysts and surrounding tissues in patients with lymphangioleiomyomatosis more clearly in the lower magnetic ones. They also found that inhaled oxygen increases brightness of lung tissue more effectively at low magnetic field strengths compared to high ones.

"One of the main components of an MR system is a stable and uniform magnetic field, usually generated with a superconducting magnet," said Campbell-Washburn. "It costs less to build such a magnet at lower field strengths. In addition, the costs to install the system could be lower, since the MR system may weigh less, reducing the structural requirements for an MR room."

The new generation of low field MR increases flexibility in image acquisition. It is quieter and easier to install.

The findings were published in the journal Radiology.