Radiologists share no consensus on second opinion on outside studies 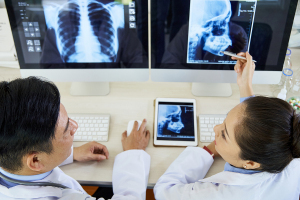 Second-opinion on OSS consultations often take place when a patient is referred to a tertiary or referral center, which is commonly an academic center with sub-specialized radiologists. Implementing best practices and protocols for these consults, the researchers argue, could yield a range of benefits for patients and providers.

Analyzing the responses from 91 SCARD members, the researchers found that 76.9 percent added OSS to their institutional PACS, and 37.4 percent required formal internal reports on all OSS. 81.3 percent allowed at least some OSS into their PACS, without requiring an internal report.

"Without an internal reread of the study one misses out on that second set of eyes on an examination, possibly by a more experienced subspecialist. Also, without an internal report the study may be placed into the PACS with images available to the clinicians but no report. This is because less than 50 percent of outside studies are brought to the second institution with the original report," author Parisa Khoshpouri, a research assistant at the University of British Columbia in the department of radiology, told HCB News. "Having images in the PACS without a report places a burden on the clinical team diagnosing and treating the patient. The alternative would be performing a new imaging study and extra cost."

A standard approach must be facilitated through discussions between organized radiology and payors, according to Khoshpouri. She noted the development of a best practice can help address patient care, financial implications, quality and safety precepts, as well as medicolegal implications for radiology departments.

"We would like to see them get together and formulate a reasonable approach to appropriate use and reimbursement for second opinions. At the same time that we feel that radiologists should be paid for their time and expertise, we recognize the payors’ issue in having to pay someone to get sequential 'second', 'third', 'fourth' opinions and so on from Mayo, Duke, Hopkins, Brigham, UCLA and Stanford on the same set of images," she said. "We think the American College of Radiology, Center for Medicare Services, and a representative from private insurers should convene a consensus forum and develop a national policy that is fair and economical."

Khoshpouri collaborated with the department of radiology at Johns Hopkins University School of Medicine on the study.

The findings were published in an ahead-of-print article from the January issue of the American Journal of Roentgenology (AJR).