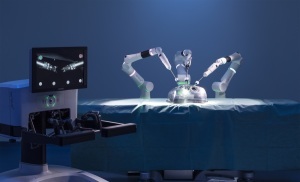 The first Versius surgical robotics system is now
in use at Galaxy Care Hospital in India
The first of CMR Surgical’s Versius platforms has found its home at a center specializing in laparoscopy.

The surgical robotics system will now be used at Galaxy Care Hospital in Pune, India, in a wide range of surgical procedures that include transthoracic operations, hysterectomies and myomectomies.

"One of the key features that makes Versius a good fit for Galaxy Care Hospital is its modularity," Martin Frost, chief executive officer and co-founder of CMR Surgical, told HCB News. "Because the system is modular, the Versius system can be moved between operating theatres quickly and easily, increasing the opportunity for use and the cost-effectiveness of Versius. With our partnership with Galaxy Care, we're pleased to be able to make minimal access surgery available to more people globally."

The modular and portable system is expected to cut surgical time while improving patient outcomes, and is more affordable compared to large console-based robotic systems, according to CMR Surgical, which recently obtained $240 million that it will use to fund the full commercialization of Versius.

The installation also marks the release of the first clinical registry for a surgical robotic system, according to CMR Surgical, which manages it in partnership with providers to record and monitor patient outcomes of all procedures involving Versius to ensure patient safety. Outcomes measured include operative time, length of stay, 30-day readmissions, and returns to the operating room within 24 hours. The creation of the registry stems from CMR Surgical’s aim to provide post-market surveillance as part of the IDEAL (Idea, Development, Exploration, Assessment, Long-term study) framework, which calls for manufacturers to describe the stages of innovation in surgery and other interventional procedures.

"Our mission is to address the higher unmet need for flexible, surgical care," said Frost. "Versius is indicated for upper GI, general, gynaecological and colorectal procedures, and since its introduction into Galaxy Care Hospital, Versius has been used to complete transthoracic, hysterectomies and myomectomies, under the leadership of Dr. Shailesh Puntambekar."

CMR Surgical expects the system to gain traction in European and Asia-Pacific markets, and for it to become a competitor of the leading robotics system, the da Vinci system by Intuitive Surgical, in the near future.

It plans to have additional Versius Surgical Robotic Systems in use at hospitals across India and Europe by the end of 2019, including in ones that are a part of the National Health Service in the U.K.